The world Jewish Congress reacted sharply to Petlyura in Vinnytsia 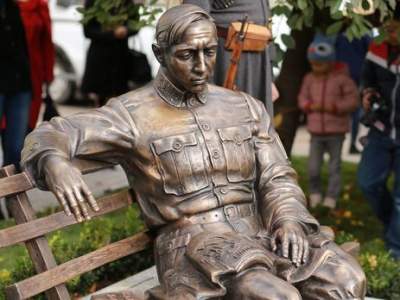 The Congress was called to remove a monument to the man who tried to destroy the Jewish population.

The world Jewish Congress condemned the opening of the monument to the Ukrainian political and military leader Simon Petliura in the winery. This was reported on the website of the Congress.

“The world Jewish Congress upset shameful and regrettable decision of the municipality Vinnitsa to mention anti-Semitic nationalist leader Simon Petlyura as the “protector of Ukraine”, – reads the statement of the Director General of the Congress Robert singer.

According to him, Petliura was responsible for the massacre, which killed 35-40 thousand Jews. Singer believes that the monument to Petliura in one of the historical centers of Jewish life in Ukraine “sends the wrong message” to the Ukrainian people and future generations, undermining the foundations of democracy and tolerance.

“It is inconceivable that the man whom today we would, without hesitation, be called a terrorist, was given the honor in the same city in which he and his regime tried to destroy the indigenous Jewish population,” said singer.

He urged local authorities to remove a monument to Petliura in the winery.
In Vinnytsia on October 14 unveiled a monument to Petliura. It is made of bronze in full size. “Compositional Symon Petlura sitting on a bench, holding a map of Ukraine. On it are the two main mark – a winery as a temporary capital of Ukrainian people’s Republic and Kiev – the capital of the state, temporarily occupied by Bolshevik troops,” – said in the Vinnytsia city Council.

This is the first in Ukraine monument to Petliura in full growth, in 2001 Exactly was the bust of political figure. In the future the monument will become part of the historical complex “the Museum of temporary capital”.

Petlura was the head of the Directory of the Ukrainian national Republic in 1919-1920.