The Ukrainian military in the Donbass killed five militants 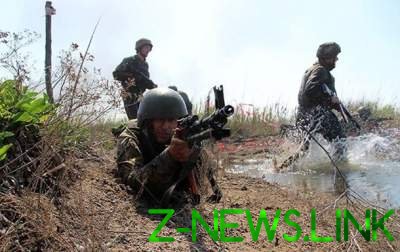 During the past days in the Donbas separatists 12 times broke the silence mode, while firing in the area of Popasna village of Trinity, which is home to the civilian population. On Tuesday, may 7, the press-center of staff of environmental protection.

It is noted that in the course of the attacks three times used banned by the Minsk agreements of 120 mm mortars.

See also:  In Kiev killed the wife of a jealous ex-wife

“The enemy also fired on our defenders of the armament of infantry fighting vehicles, rocket-propelled grenades of various systems, heavy machine guns and small arms”, – said the press center.

At the same time twice conducted attacks on the village of Troitskoe. Victims among civilians managed to be avoided.

Also, the enemy fired at positions of the joint forces in these human settlements Talakovka, Pavlopol, Lebedinskoye, Marinka, Granite, Novozvanovka.

“Losses among the military personnel of the joint forces there. For each firing, the enemy got an adequate response. According to intelligence reports the joint forces on may 6, five of them destroyed”, – noted in EP.

See also:  In the Donetsk region detained the Belarusian who fought in the ranks of the separatists

Also, since the beginning of the day Tuesday, may 7, the enemy four times fired at positions of the OOS near Avdeevka, Hnutove and Bogdanovka. As a result of attacks one Ukrainian soldier was injured.