Home / WORLD / The Taliban are ‘country boys with a code of honour’? Is this really an apt way to describe these cold-eyed killers of women?

The Taliban are ‘country boys with a code of honour’? Is this really an apt way to describe these cold-eyed killers of women? 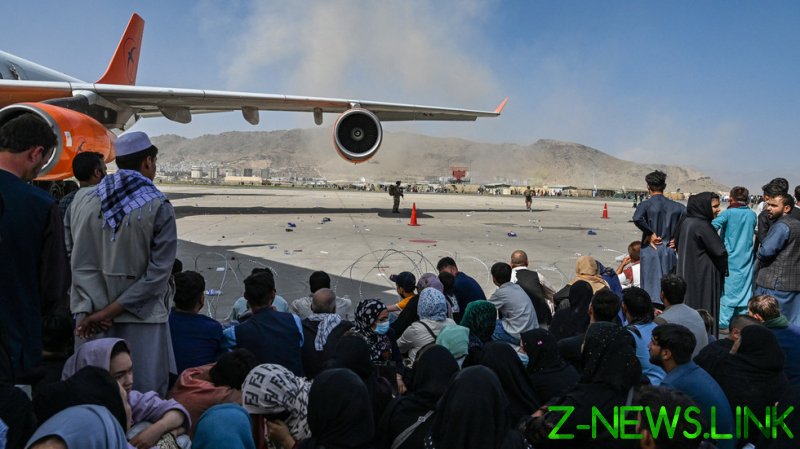 Watching the chaos at Kabul International Airport as people of all nationalities try to escape from what they think the Taliban will do to them reminds me of what went through my mind each time I got off my plane after landing there.

My one overriding thought was always: whatever happens, do not let yourself be captured by the Taliban. From discussions with the many brave people I worked with in Afghanistan, nearly all of them had the same thought.

Some had developed coping strategies based on the poet Rudyard Kipling’s lines about a lone wounded British soldier: “When you’re wounded and left on Afghanistan’s plains / And the women come out to cut up what remains / Jest roll to your rifle and blow out your brains.”

The modern-day equivalent of this Afghan mode of despatch is to be tortured, before having your head cut off to be shown on YouTube, or having a bullet put in the back of your head as iPhones capture your end (as I watched a video of this happening to a woman there this week). This and other forms of atrocity were certainly the fate of several coalition soldiers who became separated from their units during their time in the country.

We all knew of the dreadful acts of cruelty perpetrated on people by the Taliban, the floggings, the amputations, the shootings and the hangings. The brutal suppression of females, girls and women.

It is no wonder that the people who worked with us are scared.

Now we see the Taliban in control of virtually the whole country. For ‘country boys’ they have done pretty well, and achieved their retaking of power very quickly against a huge well-equipped and trained army.

The description of them as “country boys” who “happen to live by a code of honour” comes courtesy of British Chief of the Defence Staff General Sir Nick Carter, words that have provoked outrage and led to him being accused of being a “Taliban apologist”. He also told Sky News that people should be “be very careful using the words enemy” about them and added, “I do think that they have changed”.

Such sentiments have led to shock and criticism on social media from many veterans who witnessed Taliban atrocities and fought bitter battles against them.

But why is General Carter saying these things?

Is he right that the Taliban has changed? Or is he thinking about the immediate situation in Kabul and perhaps the longer-term future? After all, a thousand of the general’s troops are now on the ground in Kabul trying to evacuate both British passport holders and those who worked for us. While surrounded by many thousands of heavily-armed Taliban fighters. It may simply be a step aimed at protecting his soldiers.

From what we can see, the Taliban appears to be behaving reasonably in Kabul so far. It is supported by a slick media operation of polished speakers following an upbeat line of inclusivity and maintaining the rights of women to work. It’s obvious that it wants the United Nations’ and other international donations to continue.

They’re certainly no mugs. The group’s wait-and-see strategy over the past few years has been mixed with astute diplomacy and admirable patience. Following the bilateral peace deal agreed between the group and President Donald Trump last year, we saw how the Taliban prevaricated on having peace negotiations with the now ex-president Ashraf Ghani’s government. In fairness, Ghani was not consulted at the outset by the US and did not really help the process himself with his bullish displays.

By appearing to cooperate with, and not attack, coalition forces, the Taliban played a clever game with the West as their troops steadily left. Meanwhile, it steadily chipped away at the morale of the Afghan government and people by assassinating senior officials, judges, lecturers and police chiefs.

At the same time, it continued to take out isolated Afghan police checkpoints and army bases. This was made easy for them by Ghani’s government. His corrupt officials and generals, many of them incompetent and there through nepotism, stole the pay of their soldiers and police officers and often didn’t even make sure that they got food or ammunition.

The Taliban exploited these weaknesses by offering the troops food, money, and their life if they downed their weapons and deserted. It reinforced the alternative for these government soldiers by publicly massacring special forces who fought against them and then ran out of ammunition. No wonder the regular army just gave up.

Moreover, the Taliban weakened the faith of city dwellers that their government could protect them by continually blowing up power lines, bringing weeks of power cuts, whilst disrupting supplies of fuel coming into Kabul and other large conurbations.

Even if you despise the Taliban or what it believes in, you have to admit it’s played a clever game, albeit in the face of a tired America looking for a way out.

But will the Taliban 2.0 really be different from its first incarnation? It’s worth remembering in this debate where the Taliban come from. Back in the mid-1980s, the Soviet occupation in Afghanistan was at its peak. Millions of refugees, mostly women, children and the old, fled the country, leaving most of the men to fight.

Life for these children in impoverished refugee camps along the border with Pakistan was awful, with no future, no fathers, nothing.

These kids, some 200,000, were enrolled in madrassas funded by wealthy Saudi families. They were a place of respite where the young boys could get food, clean accommodation and a structure to their lives. In these isolated environments, the children studied Wahhabism, which, for more than two centuries, has been Saudi Arabia’s dominant faith. It’s an austere form of Islam that insists on a literal interpretation of the Koran, and adherents believe that those who don’t practice their form of Islam are heathens and enemies.

These students were cut off from the world and based their thoughts on what they were taught. Many learnt of jihad and the need for strict discipline and focus. Hence their name: Taliban has its origins in the Pashto word for students.

By the early 1990s, Afghanistan was disintegrating into a collection of separate warring fiefdoms led by the various warlords and Mujahideen leaders who had fought the now-departed Soviets. Some took to dealing in opium, and took whatever and whoever they wanted. The rape of boys was endemic.

Kandahar, the second city of Afghanistan on the border with Pakistan, had become a lawless place. The people were being preyed on by many forms of gangsters or the lackeys of those in power.

A then little-known cleric by the name of Mullah Omar then brought some of these quiet disciplined students, the Taliban, into the picture. They set about the criminals with a will, hanging, chopping and beating. They also brought with them their strict interpretation of Islam which resulted in further oppression of women and girls in what was already a relatively harsh environment for them.

This sense of stability created amongst the people combined with harsh responses to dissenters, alongside the weapons and funds provided by the Pakistani Inter-Service Intelligence agency, led to the Taliban’s growing ascendancy and the eventual capture of Kabul in 1996.

The stories of the banning of just about anything that gave pleasure then began to emerge. Destroying TVs, stopping music being played, beating anyone wearing Western clothes or males not growing a beard. All enforced with savage and brutal punishment. But it was the plight of the women that caused the real outrage. They were not even allowed to go out of the home without a male guardian, not allowed to work or get an education. Those who defied the edicts ended up being shot in sports stadia.

General Carter seems to be saying that there won’t. Or is he just being pragmatic, knowing that he needs to make sure his troops get out safely along with those they are trying to evacuate? He also knows that the Taliban is in complete power, and no one can do anything about it.

There is no point in standing in front of a runaway horse and trying to stop it. Far better to run closely alongside and guide it in a direction where it can do the least damage and be stopped safely.

These days, you don’t become the chief of the defence staff because you are a fool.

Perhaps he is trying to be as clever as the Taliban ‘country boys’ have been. Time will tell, as he says.

However, having spent many months in Afghanistan, and having listened to and witnessed some of the tales of the Taliban’s ruthlessness and its unshaken belief that its way is doing Allah’s will, I think I can predict what’s coming round the corner.

What we in the West have allowed to happen in Afghanistan is the equivalent of us having pulled out of Germany in the mid-1960s and allowing the Nazi party, under new management and with slicker, nicer, more urbane spokesmen, to take over the reins of power again. Good idea, anyone?