The declared cost of the new smartphone Huawei Honor Play in the territory of the Russian Federation. The world’s first mobile GPU with Turbo – technology short-term overclocking, which Huawei calls itself “scary”. Fear it needs, of course, competitors, but not the users. 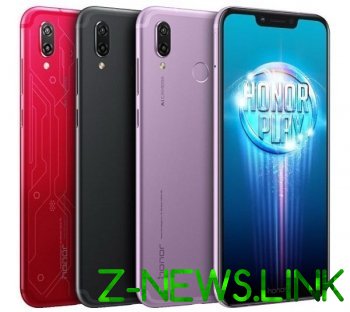 This is the GPU Turbo allows you to overclock your card in Huawei Honor Play 60 percent in those applications where it is particularly required, for example, in video games. This, incidentally, indicates the name of the cell phone. Smartphone on the territory of our country is worth exactly 25000 rubles, and order it will be already tomorrow, while the start of sales is scheduled for August 10. Of course, in China its price is much lower, and costs 10 times to think, whether it makes sense against the background of rising VAT, fuel prices and products, and other benefits from the government to pay for the three letters of the PCT.

New Huawei Honor Play runs on Android OS 8.1 Oreo shell EMUI 8.2 and offers 16 camera+2 MP and rear 16 MP on the front. Its screen is an IPS panel with a 6.3-inch Full HD+ and the big cut, and its battery has a capacity of 3750 mAh. The smartphone also has a modern Kirin processor 970 and memory – 64 GB ROM and 4 GB RAM plus slot microSD 256 GB. Note that the battery in the Huawei Honor Play got the quick charging.