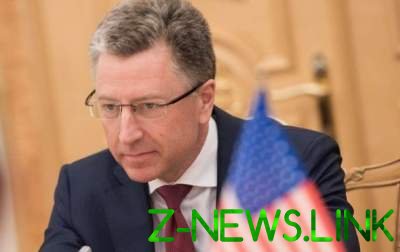 The American diplomat said about the contradiction in the words of the representatives of Russia.

The special representative of the US state Department in Ukraine Kurt Volker called “the eternal paradox” that Russian authorities are discussing directly, that the us supply weapons to the APU “will raise the price of the conflict in the Donbas for Russia,” saying that “they are not there”.

He said this in an interview with Russian radio station Ekho Moskvy.

“Of course, this is a contradiction. And Russian, of course, know that they are in Ukraine. And they know what they’re doing,” said Walker.

According to the diplomat, in the presence of “goodwill on both sides” and with the help of peacekeepers, the Minsk agreement could be done until enshrining a special status for the currently occupied part of the Donbass.

“The basics are the following: the cease-fire, the diversion of heavy weapons, access of observers to the territory and protection, the holding of local elections, Amnesty, special status for this part of Ukraine, which is then recognized by the Constitution. It’s all achievable and doable,” he said.

Walker believes that the “window of opportunity” to resolve open presidential elections in Russia, “when it may be in Russia’s best interests to finally resolve the question of Donbass”.