Home / policy / The right to learn from their mistakes

The right to learn from their mistakes 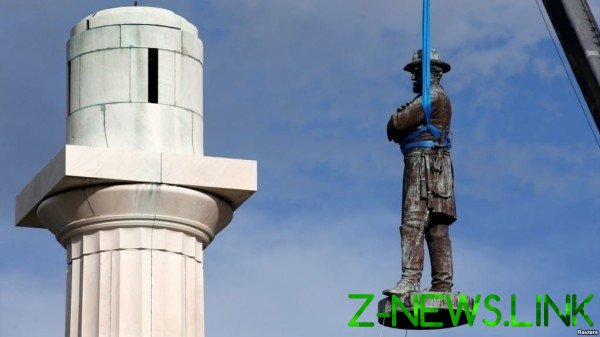 The question of “platycopida” should be resolved by the citizens of those countries where it occurs.

Those monuments to the Confederacy were mostly set a century ago as a symbol of healing of wounds of Civil war and reconciliation. Its therapeutic role they performed, and almost a hundred years nobody touched them.

Now the trend has changed, and perhaps at least some of them will also need to sacrifice for reconciliation is the following groups. That in their defense, almost no one speaks, suggests that reconciling their role is much less than annoying. And policy, the population of States has the right to decide the benefits of action — demolition or abandonment thereof — more.

And do not say that supporters of the Confederacy or the descendants of the generals sit at home in fear. If the question was something more for them burning, like the growth of taxes, the same effect would be how to come to numerous rallies in support of trump. Just the topic has become outdated and no longer relevant. For them but not for the descendants of slaves who need another symbolic victory.

And Columbus or “founding fathers”, from my point of view (and only about her and I can write), the demolition must not touch. They lived in a different era, when slavery and colonial conquest campaigns were acceptable and normal. Children of their time, which is impossible for it to judge. And they not the main villains among his contemporaries.

The confederates also lived and fought in a time when slave-owning way of life was already condemned by almost all the world except the Arab monarchies and Brazil, and desperately fought for it, knowing that even the majority of citizens of their own country was against them. Yes, causes of the Civil war were many. And, by the way, the question of slavery there is not the most important. But he was, and the people went into rebellion, fought for it, despite the fact that nothing could not know about the condemnation of slavery almost the whole world. And with all the heroism of the “gentlemen in grey” in their violent struggle and brightness of their images in literature and on screen, they fought for evil, is condemned already the case, fought in the dream to start their own plantation with live cattle and make money on it. And then, after the defeat, so stubbornly clinging to the remnants of his lifestyle by selling the practice of segregation, lynchings, “Ku Klux Klan”. Everything to the last drunken poor white skin color feel more important than the best black.

I am glad to review the “Gone with the wind” or read the heroic story of Jackson Stone Walls, but I can’t condemn those who look at the confederates as people, ready to shed his foreign blood, only to one race continued to oppress and keep in the gland another. Though a lot of politics and speculation in this matter, but people have a right to their opinion.

And I can’t blame people wanting to remove this stain from the history, but with a prominent and honorable place, not as a person with a modicum of empathy, or as a citizen of another country, which fought with the monuments over the past century, nor as I understand that if where-that we hoisted the statue of the gentleman revolted over noble liberties and the right to flog my great-great grandmother and change her Borzoi puppies, then he’d be faced with the requirement to carry it to hell.

The latest: the fight against the history of what is happening is irrelevant, the story remains what it is. But a regular rethinking, changing notions of what decent, acceptable, correct — it should be, because evolyutsioniruet humanity itself. History should be taught, to know and to give her assessment, at least for that past evil does not happen again.

And General Lee and President Davis, and the rest will continue to live in memory and textbooks. But not remembered as saints and heroes, and how different, good and bad, but coming down from the right and righteous path people. Persist in the preservation and worship of the old evil.

The only thing that you should not be politicizing the violent radical fervor, when a comb haircuts all of all ages, guilty only in the fact that wigs or had the temerity to belong to the wrong social classes and skin colors. However, since it’s not about my country, which has experienced similar, then the citizens of other States still have the right to err, to be wrong — at least in order to learn from their mistakes.