According to the NBU, state and state-guaranteed debt since the beginning of the year decreased to 2.15 trillion UAH.

For the first quarter of 2019, the ratio of government debt to GDP declined to 59%, according to the Inflation report National Bank.

In NBU reminded that in the beginning of the year, the government actively attracted debt resources. “This is, firstly, due to the busy schedule of repayment of the debt, and secondly, the need for deficit financing, given the small revenues from privatization. The money involved in the external and domestic markets. In particular, funds received from the offering of the bonds and the loan under the guarantee of the world Bank”, – the document says.

A key source of deficit financing remained of borrowing on the domestic market – both in national and in foreign currency. The lion’s share amounted to short-term securities. Although the amounts of repayment of obligations has been significant, attracting significantly exceeded, noted in the NBU.

“Despite such involvement, public and publicly guaranteed debt decreased by 1% since the beginning of the year to 2.15 trillion UAH as of the end of March 2019. This is due to the payments for the guaranteed debt, in particular to the IMF. An additional factor was a slight strengthening of the hryvnia”, – concluded in the national Bank.

See also:  The experts evaluated the Novak Russia's withdrawal from the transaction OPEC+

According to the Finance Ministry, in 2018, total public debt and publicly guaranteed debt has declined to almost of GDP to 62.7%. During the year this indicator decreased by more than 9% (71,8% in 2017).

According to the Ministry, on December 31, 2018-year, public and publicly guaranteed debt of Ukraine was on the level of 2.17 trillion UAH. 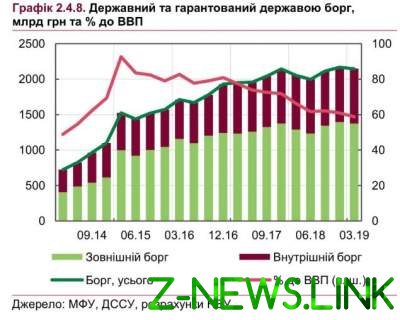