Home / photo report / The most unusual churches in the world. Photo

The most unusual churches in the world. Photo 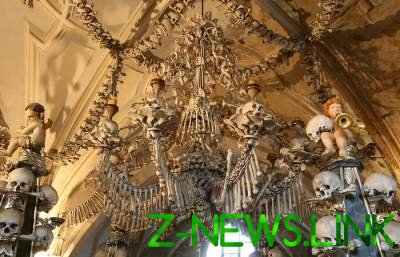 For them to go on a trip.

Among the huge number of temples of different religions and faiths have on our planet special that seem sometimes objects outside of time. People are not always built temples in accordance with the religious canons, and even fashion. So today, in different corners of the globe, you can find temples that may seem very strange, at least when it comes to religious buildings. But perhaps that is why many of them believe special places of power.

1. The chapel of the Holy cross in Sedona 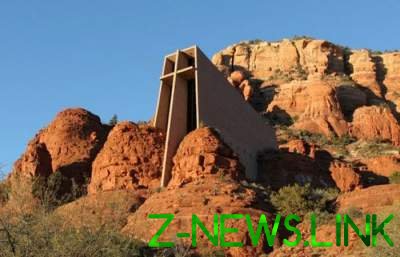 Although Church architecture remained remarkably stable over the centuries, the twentieth century saw a number of new ideas in design. In Sedona (Arizona, USA) the local chapel of the Holy cross was built into the red rocks. It was built in the 1950s, a local resident, who was inspired by the Empire state building. The chapel is like jumping out of two rocks, and from its huge Windows offer great views of the surrounding landscapes.

Interestingly, here the crowds are attracted not only by modernist architecture, but also a belief that the chapel is located on an energy vortex. It is considered that in this place thinned the border between worlds, and it helps in spiritual healing 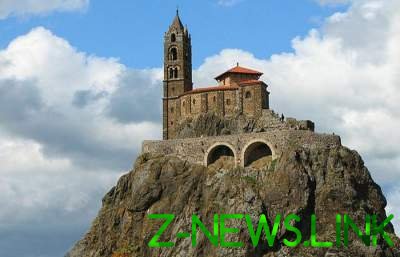 The Church is unremarkable from the point of view of the building structure. Unusual is where it is built, is on top of volcanic rock. Towering over the French town of Le Puy-EN-Valais, the rock was used for worship for millennia. Prehistoric peoples, and later the Romans established their shrines. The chapel was built in 962 ad. Godescalc the local Bishop and deacon Trianus went on pilgrimage to Spain.

Upon returning they decided to build a chapel in memory of his visit, and to make it on top of the 82-foot cliff. Climb to the chapel is possible by 268 steps carved in the rock. And adjacent to the volcanic rock, looking at the Church, stands a huge statue of the virgin Mary, which is made from Russian guns captured in Sevastopol battle. 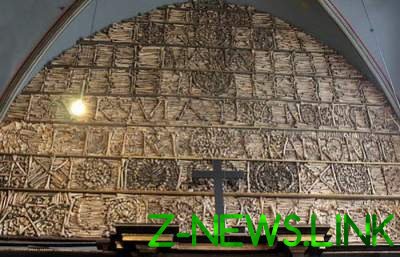 Although the Sedlec ossuary is the most famous ossuary in the world, the largest mosaic made of parts of the human body, located in the Basilica of St. Ursula in Cologne. According to legend, Saint Ursula was a British Princess about 300 to 600 years B. C., Being very religious, Ursula went on pilgrimage through Europe.

Since she was a Princess, Ursula could not travel alone, so she took her 11,000 virgins. Their ship miraculously made it from Britain to Rome in one day. From there they went to Cologne. But there’s Ursula and her 11,000 companions were captured and tortured to death by the Huns, who at that time were ravaging Europe. The relics of St. Ursula were placed in the Basilica, built in Cologne.

In the middle ages under the Church found a pit of bones. The priests felt that the remains of those 11,000 companions, and decorate the Basilica. Unfortunately, it was later discovered that the bones alleged 11 000 women-virgins are actually the bones of men infants and even large dogs. 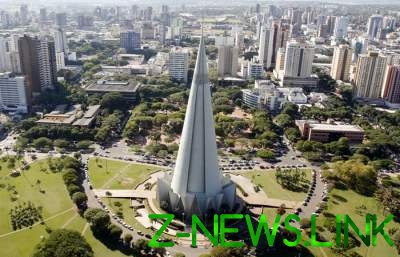 Cathedral in Maringá is also a modern Church. But if the chapel of the Holy cross in Sedona combined with the environment, the Cathedral in Maringá stands out from the surrounding area. This huge conical structure – the tallest Church in South America (its height is 124 meters). It is argued that the purpose of the Church was to “bring people closer to God,” and this can be done, at least, climbing up the 598 steps to the observation platform, overlooking the whole city.

Interestingly, those who climbs the stairs, pass by places of eternal rest of the people decided to bury in the walls of the Cathedral. The cornerstone of the Cathedral was a piece of marble taken from the Basilica of St. Paul in Rome and blessed by Pope Pius XII.

5. The Church of “Reading between the lines” 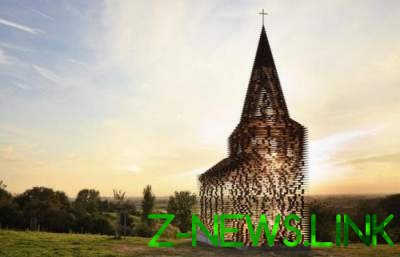 To resolve the difference between the classic design of churches and modern design of cities, the architects of Pieterjan Gijs and Arno van Varenberg built in the Belgian Borgone modern Church called “Reading between the lines”. It is unusual in that it was constructed out of 100 layers of thin steel, folded to create an optical illusion.

From one angle she looks like a normal building, but from another angle, the Church looks semi-transparent and through it one can see the landscape behind the Church. This Church is not used for regular worship, but rather is a work of art. Anyone can worship any God of your choice inside the “Read between the lines”. 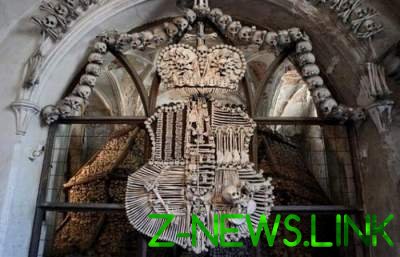 Ossuary (kostnice) is a place used for the storage of bones. It can be the size of the wooden box or the size of a city. For example, in the catacombs under Paris, you can find the bones of about six million people that have accumulated here over the centuries.

To store as many bones in one place, they were neatly placed along the walls of the huge catacombs. In Sedlec (near the Czech town of kutná Hora) is a Church, the entire interior is decorated with bones and skulls of people (just for decoration it was used about 40,000 skeletons). In every corner of the Church is a pile of bones with a height of 3 meters and a width of 4 meters.

From the ceiling hangs a huge chandelier of bones and skulls. In the niches on the walls are bowls and boxes of bones. Perhaps most impressive is the coat of arms of the noble family, made of bone. It depicts a crow peck out the eyes of the severed head. 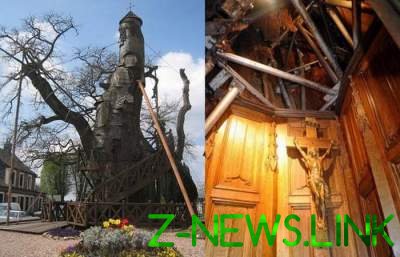 Elsewhere in France there is an ancient Church, which was built without the use of stone. Chene-chapelle (“Oak chapel”) is located in the village of Allouville-Belfast in the North of France. The whole Church is built inside a huge oak. A spiral staircase encircles the tree and leads to two separate tiny shrines. Although trees were used for worship in many places, like the use of wood for religious purposes is unique.

Oak at least 800 years (and if you believe local legend, the tree is as old as the Kingdom of France, and William the Conqueror prayed under its branches, before heading to England). In the XVII century the tree was used as a chapel after a lightning strike. Lightning burned out the insides of oak, but he miraculously survived. I took it as a divine sign, a local Abbot and the priest decided to make oak Church.

8. The chapel in the salt mine 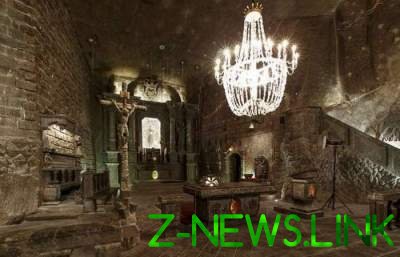 Mining has always been risky. Given that the miners are constantly in danger to be buried alive, no wonder they are often very religious people. On Wieliczka salt mine in Poland, miners carved chapels directly under the ground in rock salt. The salt mine was excavated, at least in the XIII century, and as it expanded, was built further underground chapel.

No one knows how many of them were created over the centuries as a chapel was probably destroyed and “disassembled” on salt, from which they were originally cut. Today in the mine there are at least five main chapels, the newest of them is dedicated to Pope John Paul II, who several times visited the Wieliczka mine. Located hundreds of feet underground, these chapels are still used for worship, although are also popular tourist destination. 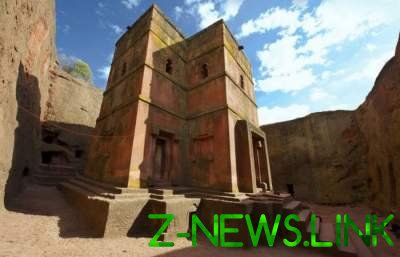 In Lalibela in Ethiopia is home to the largest monolithic (carved from a single rock) churches in the world. Instead of having to build their churches up, the local people decided to cut them deep into the earth. Just Lalibela built 11 churches, and nobody knows their exact age.

Legend has it that they were built by king Lalibela in the XIII century by order of an angel, sent by God. Experts say that in fact churches can be hundreds of years older. The largest of the 11 churches, each of which is underground, has a depth of 10 meters. 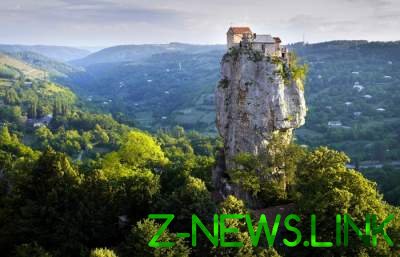 Christian monks have always tried to withdraw from society to focus fully on God. In order to gain much-desired privacy, the monks went to the deserts, Islands and other inaccessible places. In Georgia they managed to get up on a limestone monolith with almost vertical walls, known as “Katskhi Pillar”.

Pagans used a 40-meter pillar for the worship of the gods of fertility, but it stopped when Georgia adopted Christianity in the IV century. In the VII century above the pillar was built a small Church. Monks and priests used the top of the pillar for worship for centuries, but to the XVIII century nobody knew how to climb it, so ruined Church can be seen only from afar.

Managed to conquer the pillar of the only climbers in 1944. During the study, the top of the natural column was found solitary cells, which were used by the monks, and a wine cellar. In 1993, the monk Maxim Kavtaradze moved under the pillar on which soon re-built a chapel and house for the monk. Climb to the top today can be on a slightly rusted iron ladder.