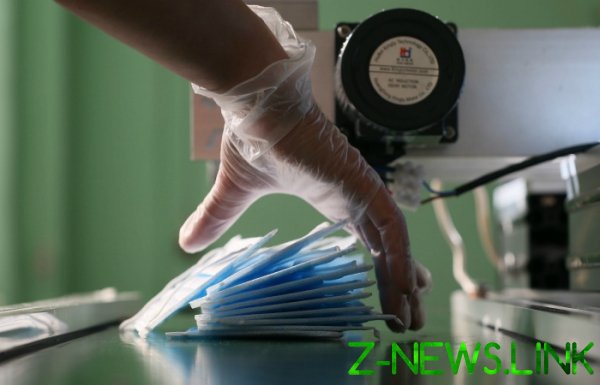 They can become a group of companies “DELRUS” involved in the supply of medical equipment and consumables. The question of the appointment of a single operator is not yet resolved

In Russia can be created a single supplier of medical masks which will buy and distribute in the regions of Russia, said “Pharmaceutical Bulletin”, citing two sources in the pharmaceutical market.

This provider may be a group of companies “DELRUS”, which supplies medical equipment and supplies, the newspaper reports.

According to sources, the group has invited networks to organize the supply of protective medical masks under direct contracts.

In the Ministry of industry “Pharmaceutical Herald” said that the appointment of a single supplier of masks is not yet confirmed. A source in the pharmaceutical market reported that the Finance Ministry opposes this initiative.

RBC sent a request to the Ministry and the press service of the company “DELRUS”.

The company was founded in 1991 in Ekaterinburg, today its headquarters are located in Yekaterinburg and Moscow. The company website States that it is working with 75 partners in Russia and the CIS. Co-owners of “DELRUS” in the SPARK database are Yulay of magadeev, Arkadi Gusovsky, Maxim Guzowska and Roman Fedotov.

The head of Ministry of industry and trade Denis Manturov said that the Ministry was considering a mechanism that will allow industrial producers of masks to supply products to the regions through a common integrator. “Now, as quickly as possible to stabilize the situation with the pharmaceutical segment that we need a clear algorithm”, — said the Minister (quoted by TASS).

“Pharmaceutical Herald” also reported that the Federal state unitary enterprise “Moscow endocrine plant” will receive from the state 864 million rubles to organize the production of masks. On this edition said a source in the pharmaceutical market and has confirmed a source close to the Ministry of industry.

With a shortage of medical masks pharmacies collided in mid-February. So, for example, lack in retail were identified in Moscow and the Karachay-Cherkess Republic, and later other regions faced with the same problems. The Federal Antimonopoly service (FAS) also recorded growth of retail prices for masks, in particular in Moscow, it had reached 900%.

In early March, the government imposed a ban on the export of certain medical products including protective masks.

In mid-March, the Federation Council speaker Valentina Matviyenko said that all manufacturers of medical masks went to work seven days a week. According to her, the lack of masks formed, because dealers are buying them and later sell on the Internet.

The head of government Mikhail Mishustin ordered the justice Ministry and the Federal penitentiary service to draw to the masks of prisoners on a daily basis.

Sunday, March 22, Manturov said that clothing companies began to produce reusable masks and they have already begun to arrive in pharmacies.