The lack of rebellion is perceived as a sign of approval 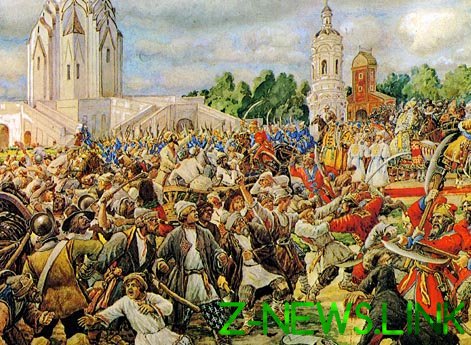 “All of the current Russian political administration hangs in a funny contradiction. Is the ruling group of two postulates, quite clear, on which they build their activities. The first is this: “if people are not rebels – so he’s all happy”. It sounds, frankly, a bit loud, so very very “in a forehead” it is rarely voiced – but that in fact are guided by them, no doubt. And this question, oddly enough, works! First of all, obviously, at the expense of simplicity,” writes social psychologist in the “Live journal”.

“I mean it quite literally: there are no considerations of “morality”, “logic”, “loyalty previous promises”, “mercy”, especially since “compliance”, etc. do not matter – if the ruling group decided to (found it advantageous and/or desirable) to pull off a little business – she turns and stop it can only be a real RIOT. And any “wildness in entornetah” for the rebellion, of course, is not considered.

Moreover, during the long years of the tenure of this principle from the authorities, too, have evolved, and now it sounds even cooler, “if not rebel – so, approve”. That is, the mere absence of rebellion have earnestly perceived by authorities and her countless servants and hangers-on as a sign of approval of all its actions by the population. “Here – talk to us – see: the streets everything is calm, people go to the bakery, walk with the kids in the Park, bins not turn over; SO, we fully support!”

From such a simple and direct question can be a long indignant and blow bubbles from anger; however, it is recognized that mind power “pragmatics”, as they call themselves, is not so easy.

Convenience for authorities, using the criterion “lack of rebellion” is in its universality. That is our government, finding that it “works great”, is gradually completely abolished all other forms of feedback “people-power” – unnecessary. First of all, of course, the election – which obessmyslili different “amendments” to almost Soviet ritual procedure “demonstration of loyalty”. At the same time thoroughly pressed media so that a real mass of them either disappeared, or no longer have the opportunity to raise thorny and uncomfortable issues to raise “inconvenient” topics.

But in recent years, almost covered even the purely decorative forms of feedback, such as “public hearings” or “Public chamber”, turning them not just into a farce, and nobody uninteresting farce. One time on a wave of Bolotnaya and Sakharov the President encouraged people to come “public initiatives”, which are supposedly subject to review in the State Duma, “if they gain more than 100 thousand signatures.” How many actually were nominated and considered in this way? That’s right – not at all.

So for 10 years of power and did literally everything he wanted, and only a couple of times thoroughly handed back – both times it was in a riot. First – after the notorious “monetization of benefits” when a pensioner’s “overlapping highways” in the end, flooded with money (money that initially no one was going to spend). And the second time in 2011-12, when after one hundred thousandth demonstrations of power suddenly handed back in the area of political freedoms, instantly liberalitas the procedure for creating parties and “suddenly” allowing the election of governors (although the year before that, Medvedev said that “gubernatorial elections in Russia will not in the next hundred years”).

However, there is a second postulate to which government, unlike the Public chamber, with great respect: it is “the struggle against independence.” Actually this “fight” already has more than 10 years, before it was known as the “combating the orange threat”. In this fight thrown huge forces and means, it is constantly buzzing agitprop, continuously creates the whole of the social movement, whose purpose is precisely to prevent the Maidan.

What the authorities say about “independence” (and, it seems, do believe it?) Independence, understanding of propaganda, the thing is simple: it’s the Apocalypse. THE END OF EVERYTHING. This is What in Any Case should Not be Allowed. Because independence is by far the machinations of enemies, spies, and the state Department, he represents chaos, mass murder, fires, destruction, darkness, hunger and the end of the great Russia. The Maidan is what they want ENEMIES. It’s terrible.

At the same time everything that is somehow connected with the “independence” or at least alludes to the “Maidan”, the Russian officialdom stigmatized and otherwise expelled from the public space. The Maidan, as Voldemort is, “you can’t call”, it’s so bad and awful.

Now let’s just compare the first and the second postulate of the current Russian authorities. On the one hand, “there is no rebellion – so we approve”; with another – “the Maidan is the most horrible thing in the world, Maidana is not a good thing.” Received a curious thing: on the one hand, all forms of feedback society-power, but a direct revolt, the regime carefully deactivated, turned off. Media, elections, even any form of “public hearings” – all turned into dust. Power almost openly say they are ready to listen only to revolt. A revolt would be recognized as the sole “legitimate objection” to which the government is ready to listen… and at the same time it is the same, but under the name “Maidan” is treated the same authority as, perhaps, the most terrible, mortal sin and betrayal! Yes, because to distinguish a revolt from the Maidan, in fact almost impossible.

The result is a very interesting concept, in which de facto the lives of today’s Russian authorities to shift its legal way cannot (elections as there are none), but rebelling against it all the more impossible, “because the Maidan!”. And the absence of riots – in the world view this government – itself means its full approval of the people.

Simply put NO OTHER way than “to endorse it entirely”, the current government to its people leaves. Even theoretically. In its kind perfect, fully sealed design. She, of course, very similar to the Soviet government (no wonder the current regime so stretches all the time to the Soviet designs). Tips, too, proceeded from the simple premise that “the workers can’t rise up against the Soviets, because the Soviets is the power of the workers themselves; do you think you can rebel against his own power?!”. This sophism, the Bolsheviks suppressed all dissatisfied quite successfully almost up to his vanishing from the scene in 1991.

In the current design of authorities in Russia unique is that this justification, like the Soviets, the Putin regime no. It’s not “government workers.” That is no justification why the people of this authority should only approve without any other options, just NO. They are not “workers”, not “anointed of God”, not “the spirit of the Russian nation”, not “the most intelligent, beautiful and successful.” One could say that “they chose the most”, but to say that the regime is not VERY fond of (say, in the speeches of Putin is practically not found the word “voters”). And this is understandable: if you say that “we chose”, so you’ll have to imply that “can not choose”, and this option, as we remember, in the set offered by power groups, is missing”.