Home / economy / The growth of Russia’s GDP is failing: us avoids even Indonesia

The growth of Russia’s GDP is failing: us avoids even Indonesia 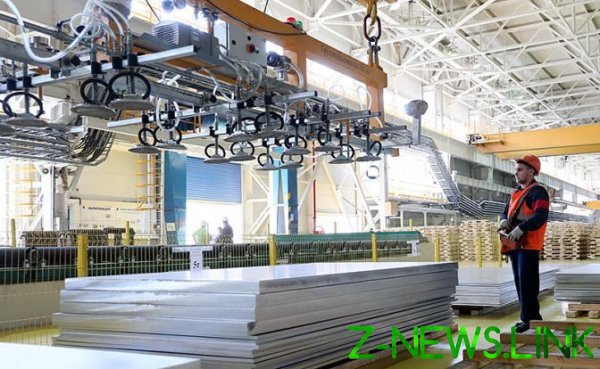 The Russian economy showed that in the short term is not going to grow. This conclusion is reasonably drawn from the report “the Picture business” in July 2019, which was presented by the Ministry of economy.

In the second quarter, Russia’s GDP grew 0.8%, the document says. In the first quarter economic growth was 0.5%, in the first six months of 0.7%. In this case the main contribution to GDP growth in the second quarter contributed to the industry. The contributions of other basic industries — manufacturing, construction, transportation — near-zero. This indicates a low level of demand in the economy, said the Ministry.

The weakness of demand also confirms a sharp deceleration of inflation (to 4.5% in annual terms by 15 July), decrease the number of vacancies in the labor market and falling import volumes.

Note that the data of the Ministry of economy better than analysts ‘ expectations. So, the Russian direct investment Fund believed that GDP in the second quarter could grow less than 0.5%. As a leading indicator of Capital Economics was found only 0.2% of the growth of the Russian economy in the second quarter. Therefore, it is possible, it’s economy mischievously “play with numbers”.

So, according to the Department, the main contribution to the improvement of the GDP dynamics in June, has made the acceleration of industrial production growth to 3.3% year-on-year. This is the data of Rosstat.

Here’s how to explain this increase in the statistical office: “recently there has been an increase in the share of processing industry (June — more than 66%), and, as a consequence, its impact becomes more significant. The production index to the corresponding month of last year determined by the product of 12 indexes calculated for the previous month. Under these conditions, the overall index is the average value of the indices of mining, manufacturing, electric power supply, gas and steam, water supply, sanitation, organization of the collection and disposal of waste”.

Analysts have made two conclusions:

— the faster growing sector (more precisely — the prices there are), the greater its weight in the overall index of industrial production.

Why it is done — it is generally understood. In February, we will remind, the statistical office reported a record GDP growth in six years. According to the new estimates, in 2018 the Russian economy grew by 2.3% against 1.6% a year earlier. This is the maximum value of “dobrinskogo” in 2012.

Record GDP growth, according to analysts, was clearly associated with replacement of management of Rosstat. The former head of Department Alexander Surinov has counted that the growth rate of GDP in 2018 amounted to only 1.7%, inflation accelerated to 4.2%, while real incomes went negative yoy. Meanwhile, President Vladimir Putin at a big press conference was clear: by the end of 2018, revenues should grow by 0.5%.

Statistical direction, it was decided to strengthen and Prime Minister Dmitry Medvedev has sent in resignation Surinov. In his place was appointed Pavel Malkov, who was previously head of the Department of public administration Ministry of economy. And now the Ministry of economy and statistics, you might say, in harness. And two, apparently trying to break up the pace of GDP to the level required for Russia’s entry into the five largest economies in the world. This task Putin has set in 2014. And not canceled so far.

But, it seems that the stagnation we have is not able to cross even the most sophisticated statistical techniques.

— To Russia to be in the top five economies need to catch up with Germany, adding to our GDP, at least half a trillion dollars, — the leading expert of the Center for political technology Nikita Maslennikov. Is hard, although possible in principle. But only if the growth rate from 3.5% of GDP per year and above.

In addition, it should be borne in mind that other developing economies grow much larger. Let’s say we’re running out fast-growing — under 5.5% of GDP — the economy of Indonesia. This country can compete with Russia for fifth place in the ranking of the largest economies. It turns out, we will be able to reach the fifth place, if only Germany in the coming years will grow with zero rate, while emerging economies will slow down sharply.

But still Russia is the most important, in my opinion, to leave on the dynamics of real incomes of the population of the negative zone. This is only possible if GDP growth of 2-2. 5% per year. This is what I think should be the next goal of the Cabinet: the well-being of its citizens, not the mythical top 5.

“SP”: — How adequate are the numbers of the economy in the second quarter?

— Quite adequate. They show that the Russian economy is stagnating. While everyone understands: for us, sustainable growth of about 1% – the reduction of Russia’s positions in the world economy.

See also:  It became known as Ukraine does not import gas from Russia

The economy Ministry figures also show that real disposable income for the half year decreased by 1.3%. While real wages, even showed growth, but very low — 1.8 percent.

On the one hand, the announced GDP growth rate is a preliminary estimate of the working economy. But on the other is the assessment for the semester. That is representative enough. And it shows the qualitative state of the economy — that we go below its potential.

Potential is the maximum growth rate under given structural constraints. He had previously estimated 1.5−2%, now in 1-1,5%.

“SP”: — Rosstat recently announced that we have grown the industry. Where did the growth?

— Statistical office, indeed, considers the sectoral indices on one technique, and cumulative — on the other. While it remains unclear what methodology is determined by the “weight” of industries. Perhaps it depends on the dynamics of wholesale prices and the monthly mean fluctuations.

In short, the indicators for the dynamics of industrial production and is indeed questionable. If you count them correctly, uniformly, the result will clearly be below the 3.3 percent maximum of 2.8−2.9%. That is, with the condition seasonal cleaning, is unlikely to exceed 1.1% per year.

And, if you counted on the goods-representatives (300 positions, defining up to 85% of industrial production in the country) growth at all. For example, the production of automobiles and internal combustion engines is reduced.

“SP”: — That is, with the growth of industrial production lied to us?

— Not quite. The figures cited by Rosstat, can be explained by the performance of major government contracts — for example, in military products. Roughly speaking, we have increased defence order and got the growth in the industry. But if this order is to remove — turns out that the industry is in stagnation.

“SP”: — the Industry is able to accelerate the GDP growth?

— The share of labor in GDP of Russia is only 20%. So even if you have grown up to the heavens, the industrial production — as told by Rosstat is not expected to have a strong impact on the overall growth of the economy.

In reality, the situation looks like. We do not fall, but the economy of Russia and the pace we have set. If the situation does not change, finished 2019 with a GDP growth of just 1%. This is the best.