The debts of Rosneft repaid from the pension savings of Russians 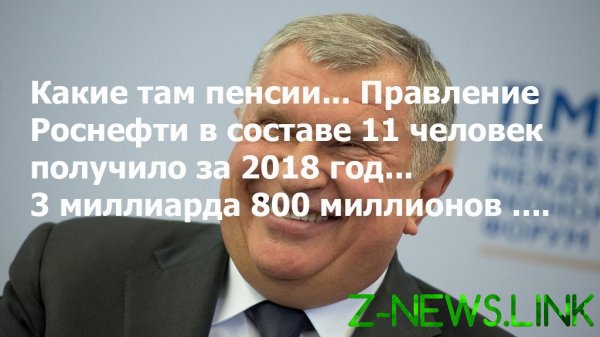 The Russian company Rosneft, on Monday, July 8, for the first time in more than a year left on the Russian debt market and increasing its cash reserves at the expense of pension funds.
According to first Vice-President of Gazprombank Denis Shulakov:
“The active participation of institutional investors, especially managers of the company.” Ie, in the bonds of “Rosneft” has directed the money of UK pension funds.

The money needed of “Rosneft” on the eve of large payments on the debt. Two weeks later, on 22 and 24 July — the company has to repay a total of 19.7 billion rubles in the form of interest payments.

“Effective managers”-the capitalists in control of Russia and using the state as a mechanism in its own interests, has long been eyeing the pension funds ‘ money. Even back in 2016, was the first statement from the bourgeois deputies that need these assets to invest in “effective business”, and that it (money) into an empty “pass old men”:

“State Duma Deputy Nikolai Valuev believes that the holding in Russia winter Olympics in 2014 and world football championship-2018 it is better for the population than raising pensions.
— In Russia hosted the winter Olympics. Now is the world Cup. Not too much going for you? Still in our country a crisis.
— No, I do not think so. In Russia it is through these events changed the attitude to the sport.
— Many people believe otherwise. For example, it is better to raise pensions.
— Well, I would eat these pensions, that’s all. How would they have enough?” [2]

And it is clear that these “managers” and their bourgeois lackeys will take those “sacred laws” that protect only their interests and also protect from punishment for any possible damages:

“The state Duma (from the editor: in 2018) passed a bill that allows pension funds to receive remuneration for their services from the savings of the population, even if these services generate losses. Also from pension funds management companies are permitted to pay expenses directly related to investment.”[3]

It means that the Russian government and their henchmen in all the structures of the capitalist state care only about the interests of “owners”-the employers, and not about the problems of the majority of the population. Because once again “Procedeu” all the retirement money will only come in the one expected the ending: cancel full pensions. Which is also stated repeatedly in the media.
Therefore, the bourgeois state will only care about the oligarchs: allocating money from your retirement savings (pension funds), highlighting the oligarchs from the budget billions of rubles — repaying personal debts, “itsprivate” companies, and therefore out of our pockets — at our expense.

Therefore, while there is private ownership of the means of production, while there is this rotten and cynical, bourgeois formation, such cases will continue to emerge and be perceived as a tribute. The only solution is scrapping the capitalist system and the proclamation of socialism.