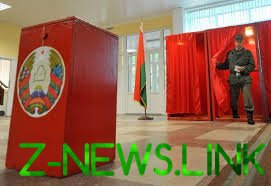 For the post of head of state fought five people, including incumbent President Alexander Lukashenko, who has been in power for 26 years. During the election campaign the three main rival of Lukashenko was withdrawn from the race, two of them the banker Victor Babariko and blogger Sergei tikhanovski was arrested on various charges and are now in jail, the diplomat Valery Tsepkalo after he was not registered in the elections left the country. In the end, the main competitor Lukashenko made Tikhanovski wife — Svetlana, around which United all the opposition forces. In support across the country, held a rally.

This afternoon in the center of Minsk began to pull forces internal troops and police in the event of street protests following the vote. Passing through the streets of the city columns of security forces motorists were met with honking horns, thus protesting against the current regime.

Throughout the day in the national capital was back.

Today in Minsk at the polling stations there were long queues in which people have done, as written by the local telegram TV, more than six hours. By the end of the day there was a shortage of ballots. In recognition of the head of the CEC Lidziya Ermoshkina, no one expected such a turnout, she says. At the same time, she noted that to extend the work sites are planned.