Home / Video news / The British are in shock: the beaches of Wales under attack by the octopus. Video

The British are in shock: the beaches of Wales under attack by the octopus. Video 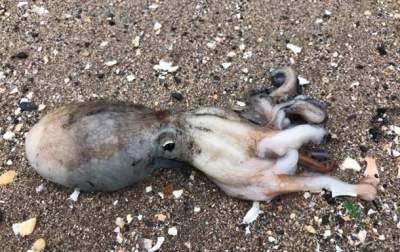 Scientists have worried about the strange behavior of marine life.

Dozens of octopuses were thrown on the coast of Wales in the County of Ceredigion.

It is noted that, for unknown reasons, animals within three days were out of the water and crawled on the sand.

Crispy octopus − a fairly common species in Britain, but they live at a depth of about one hundred meters.

See also:  The bloody terrorist attack in Barcelona: there are new details

A biologist from Bristol University Steve Simpson called the behavior of the octopuses “very strange”. Local residents also noted that nothing of the kind they had never seen before.

At the National marine aquarium in Plymouth James Wright expressed concern that cephalopods may be something wrong.

“Too many individuals on the same beach, it is very strange. Octopus found even in the tidal zone, and this indicates that, unfortunately, is not all right,” he said.

See also:  Large-scale fire in the building of the Academy of food technologies Odessa. Video

Wright suggested that octopuses could thrown ashore after a storm and lowering of atmospheric pressure.