Home / phones / The BlackBerry smartphone KeyTwo lit up in Geekbench

The BlackBerry smartphone KeyTwo lit up in Geekbench

Company TCL, is rumored to be working on a new smartphone under the brand name BlackBerry who will be the successor of the recent model KeyOne. A device with a physical keyboard on the front panel, in fact, the heir of all gadgets of a series of Bold, and his descendant will be called KeyTwo. 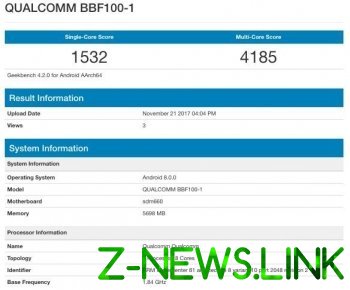 Today BlackBerry KeyTwo was spotted in the database of the popular benchmark GeekBench, and the information provided States that the smartphone will relate to the middle segment due to its Qualcomm processor 660, but it will have 6 GB of RAM, and its screen will get permission 1080х1620 pixels, side by side with the hardware keyboard.

All other options once canadian and now Chinese smartphone kept secret, except that it will work on Android OS 8 is already out of the box, and it’s not so bad. Can TCL to make a new gadget is best in comparison with the original KeyOne worked itself BlackBerry, find out in the first quarter of 2018, most likely at MWC in February 2018. We will add that now all smartphones brand BlackBerry produces TCL, and BlackBerry itself is engaged in software development.