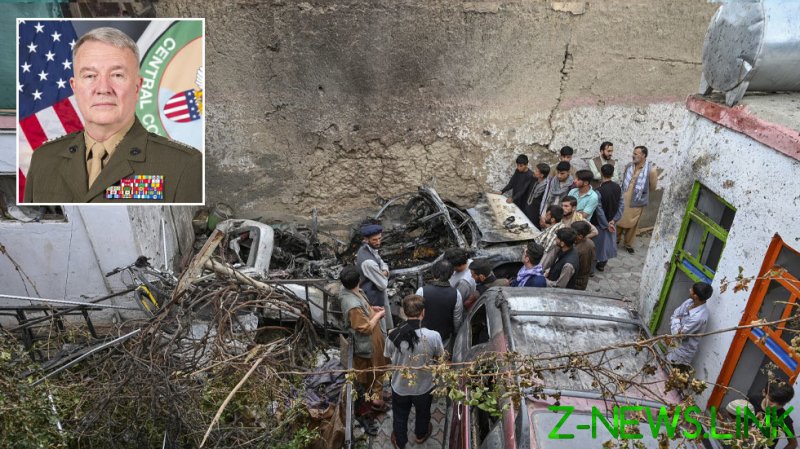 General Kenneth McKenzie, head of the US Central Command, offered “profound condolences” on Friday to the families of 10 people – seven of them children – killed in the August 29 drone strike in Kabul. It was ordered in “earnest belief that it would prevent an imminent threat to our forces,” but “it was a mistake and I offer my sincere apology,” he said.

McKenzie then did what the Pentagon does best: he put up a powerpoint presentation, explaining how US “intelligence” came to the conclusion that 43-year-old aid worker Zemari Ahmadi going to and from work in his white Toyota was really an Islamic State Khorasan (ISIS-K) terrorist plotting a car-bombing of the Kabul airport.

What he did not do, however, is resign or promise anyone else involved in this atrocity would do the same – or even be reprimanded, counseled, or otherwise disciplined. One might think someone ought to, considering that they killed children.

That’s not how the Pentagon works, though. For two weeks, the US military lied about the drone strike, and the corporate press ran with it.

McKenzie’s CENTCOM initially claimed that the vehicle was an “imminent threat” to the airport and the ongoing airlift, and that there were no civilian casualties. Then they said there might have been civilian casualties, but blamed that on the supposed secondary explosions.

“We know that there were substantial and powerful subsequent explosions resulting from the destruction of the vehicle, indicating a large amount of explosive material inside that may have caused additional casualties,” CENTCOM spokesman Captain Bill Urban said on August 29.

Literally none of this was true.

According to a New York Times investigation published on September 10, what the US thought was a suspicious compound turned out to be the office of a US-funded food charity, where Ahmadi had worked for 14 years. The suspicious bags and containers loaded into his white Toyota? Laptop cases and jugs of water he was bringing home.

Ahmadi had even applied for a visa to emigrate into the US, as one of the “special immigrants” the Kabul airlift was ostensibly trying to evacuate. Someone gave the order, however, and a Hellfire missile obliterated him, his car, and seven children that came to greet him.

The last US flight out of Kabul departed just before midnight on August 30. President Joe Biden addressed the nation the following day, calling the airlift an “extraordinary success.” The day after, Defense Secretary Lloyd Austin and Chairman of the Joint Chiefs of Staff General Mark Milley faced reporters at the Pentagon, patting themselves on the back for a job well done.

Asked about the drone strike, Milley described it as “righteous” and said it killed an ISIS-K “facilitator.”

“Were the others killed? Yes. Who are they? We don’t know,” he said, seeming more interested in talking about his own anger and pain over the war that just ended.

Twelve days later, on Monday after the Times investigation was made public, Pentagon spokesman John Kirby was still insisting that the Kabul strike had prevented an “imminent attack” against the airport and the US forces there. It wasn’t until Friday afternoon, when Washington traditionally releases all the bad news, that McKenzie popped up on the screen at the Pentagon briefing room and delivered his “oops.”

Except this isn’t an “oops.” It’s a war crime. They killed children.

Ahmadi and the children were killed because the White House had to look tough after the August 26 suicide bombing at the Kabul airport killed 13 US troops and 170 Afghans, and demonstrate “over the horizon” capabilities it claimed to have. McKenzie had to look like the withdrawal wasn’t a humiliation. Milley had to look competent – just like when he reassured China in January that “the American government is stable and everything is going to be OK,” while working with the Democrats to sideline President Donald Trump and prepare DC for Biden, according to a book widely quoted on Tuesday.

Resign? Of course not. Besides, Milley said he did nothing wrong, and Biden declared “complete confidence” in him.

Thing is, Joe and Ken and Mark and everyone else involved up and down that chain of command killed children.

Worse yet, they had to have known it right away. Local media reported the civilian casualties immediately, followed by outlets like CNN. RT interviewed the survivors days before the Times investigation was published. Is anyone seriously suggesting the New York Times had the resources and capability that the infinitely better-funded Pentagon and the CIA did not? Or were they too busy studying critical race theory and purging domestic “deplorables” to pay attention to which white Toyota they were blowing up in Kabul? Don’t they all look alike, anyway?

It’s not even the first time, either. According to the ‘Drone Papers’ published in October 2015 and detailing US drone strikes in Afghanistan, Somalia, Yemen and elsewhere, up to 90% of casualties at one point were innocents – but the military classified them as terrorists anyway.

The man who revealed this, Daniel Hale, was sent to prison for 45 months back in July.

The man who blew the whistle on the CIA’s torture program, John Kiriakou, likewise ended up behind bars. WikiLeaks’ Julian Assange is still stuck in an English oubliette, a decade after exposing US war crimes in Iraq. Meanwhile, the generals and politicians who murder children and commit other war crimes – they get medals and promotions, fawning book accounts, lush retirements in “defense” industries. And power, of course.

That’s how the empire works. Always has been, even as its child-murdering leaders talk about “defending democracy” and “rules-based international order” and “human rights for women and girls.”

Tell that to two-year-old Malika Ahmadi and Sumaya Yousoufi, whom you killed on August 29 in Kabul. I hope their ghosts haunt you for the rest of your miserable lives.