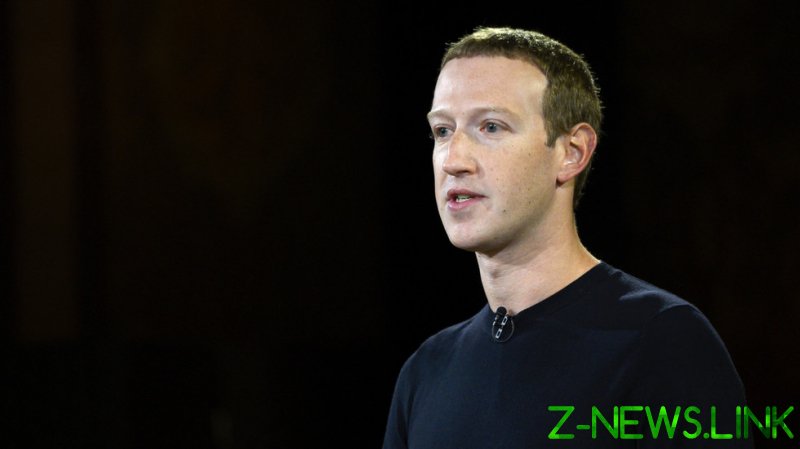 I don’t really want to defend Zuckerberg, or the machine for surveillance and monetization of private information he has built under the guise of a social network. For hundreds of millions of people across the world, Facebook, Instagram and WhatsApp – all of which his company owns – are the internet, and this is a problem.

Thing is, it’s also a problem for the current US establishment and the media-political complex, which is quite obviously trying to compel Facebook to be even more censorious of dissidents – under the guise of “protecting the children” and “saving Our Democracy,” of course.

That seemed obvious enough last week, when disgruntled former employee Frances Haugen showed up in the US Senate, backed by high-power PR agencies and lawyers connected to the ruling Democrats. She had already been instantly verified on Twitter, interviewed by ‘60 Minutes,’ and endlessly promoted across all major corporate outlets. Quite a contrast to the treatment the US establishment has meted out to genuine whistleblowers such as Chelsea Manning, Julian Assange, or Edward Snowden, no?

Another ‘whistleblower,’ Sophie Zhang, has emerged this week. Much like Haugen, she worked in one of the censorship cells, this one focused on “inauthentic behavior” – i.e. fake accounts or bots. She supposedly single-handedly took down such a network in Honduras, and flagged others in places like Azerbaijan, Brazil, Bolivia, Ecuador, India, Spain and Ukraine, among others.

Zhang, who claims to be shy and shun the limelight, has spoken to BuzzFeed in September 2020 and to the Guardian in April this year – and just went on CNN to say she was encouraged by the bipartisan reception given to Haugen, and wants to do her “civic duty” to “democracy” and testify herself.

Then on Tuesday, the Intercept made public Facebook’s blacklist of ‘dangerous individuals and organizations,’ people and entities one is not supposed to mention on the platform under the penalty of censorship. The document was framed through criticism of Facebook’s supposed racist treatment of Muslims and racial minorities, which is the prevailing political orthodoxy in the US at the moment.

It’s worth noting that the outlet originally established to publish Snowden’s revelations about the NSA ran off its founding editor Glenn Greenwald last fall, because he wanted to criticize the censorship intended to help the Democrats in the 2020 election.

Facebook was involved in that censorship too. Andy Stone, who came to Facebook after working for numerous Democrats, openly admitted to shadowbanning the New York Post story about the shady behavior of Joe Biden’s son Hunter. The move was actually more effective at suppressing the story than Twitter’s overt suspension of the Post, in the weeks preceding the US presidential election.

“Once is happenstance. Twice is coincidence. The third time it’s enemy action,” is supposedly an old Chicago saying quoted by a character in Ian Fleming’s ‘Goldfinger,’ one of the early James Bond novels. There is definitely a pattern of attacks on Facebook and Zuckerberg – and it’s coming from the very people they helped get into power, no less.

Earlier last year, billionaire meddler and Democrat mega-donor George Soros fired off a series of op-eds demanding the ouster of Zuckerberg and other top executives, arguing that their refusal to censor President Donald Trump for “misinformation” would lead to him winning the election.

Trump had admitted to using social media to bypass the corporate outlets – which had overwhelmingly endorsed his Democrat rival Hillary Clinton – in 2016, and his shocking victory led to Democrats demanding social media censorship on grounds that “Russian misinformation” was to blame. That’s how this whole effort to purge social networks of “wrongthink” started, really.

Ironically, Zuckerberg had helped Democrats and their friends “fortify” the 2020 election, not just by shadowbanning the Hunter Biden story, but by donating $419.5 million of his own money to counties across several key states. While theoretically nonpartisan and nonpolitical, these donations went overwhelmingly to Democrat voter-turnout campaigns, hiring poll workers from the pool of Democrat activists, and harvesting mail-in ballots.

Instead of being celebrated as a hero, however, Zuckerberg got a constant, coordinated campaign against Facebook by Our Democracy, which demands full narrative control and tolerates no possibility of dissent.

Perhaps he now hopes to leverage “reforms” Facebook is proposing to Congress, so he can keep paying the protection racket while his competition gets quashed under the regulatory burden. Surely he’s intelligent enough to realize that this won’t work. No matter how long he manages to stay atop the tiger, eventually he’ll get eaten with the rest of us.