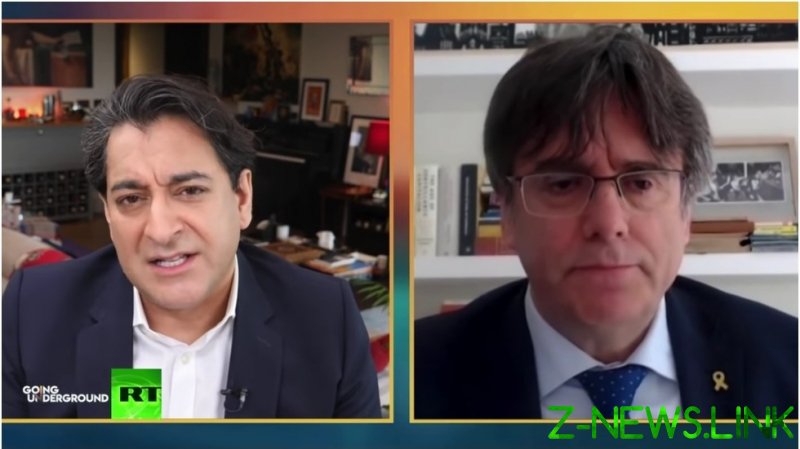 Puigdemont fled Spain in 2017, after Madrid charged him with rebellion, sedition, and misuse of public funds for organizing the Catalan independence vote that year while serving as the head of the region’s government.

In January 2020, a Belgian court refused to extradite the politician to Spain, citing his immunity from prosecution as a member of the European Parliament. However, the EU’s top legislative body voted this month to strip him and two other pro-independence MEPs from Catalonia of parliamentary immunity, paving the way for their possible extradition.

Speaking to RT’s Going Underground with Afshin Rattansi, Puigdemont called the decision by fellow MEPs “a clear threat against one of the basics of the European democracy.”

“When a member of the European Parliament is politically prosecuted, and the parliament fails to defend his immunity, that is a very bad sign,” he said.

That is not in the frame of European law, and that undermines, in fact, the moral authority of the European Union to teach other regions of the world to protect human rights and fundamental values.

Puigdemont said he continues to serve as MEP, participating in official events, even as extradition once again looms over him. He is convinced he “will not have a fair trial” in his home country.

“It is shameful for European institutions to have a clear proof that it is a political prosecution by a member state [of the EU] and to collaborate and to be a part of that prosecution,” he said, stressing that he was elected to the European Parliament by the people of Catalonia who support his views. Puigdemont added that he had hoped the EU would send Madrid a message that they must “solve political conflicts using political tools.”

In 2017, more than 90% of Catalans backed independence in a vote that was never authorized by the Spanish government and was later invalidated by Spain’s Constitutional Court. Several top pro-independence politicians were jailed for their role in the referendum. The verdicts sparked large-scale protests in Catalonia’s capital, Barcelona, some of which led to clashes with police.

The Spanish government’s hostility towards Catalan independence remained the same after Pedro Sanchez from the socialist PSOE party became prime minister in 2018, according to Puigdemont. He said the new government updated its ‘vocabulary’ compared to their predecessors from the conservative People’s Party, “but that’s all.”

“Nothing has changed. People remain in jail. People remain in exile. The general prosecutor is prosecuting ideas,” Puigdemont argued, saying that officials in Madrid “ask about dialogue, but in a very rhetorical way.”

Spanish Foreign Minister Arancha Gonzalez Laya, meanwhile, praised the European Parliament for ending the former Catalan leader’s immunity. “Catalonia’s problems are to be resolved in Spain – and not in Europe,” she said. Puigdemont has the opposite opinion.

The message we want to share with the rest of the Europeans: We Catalans are part of Europe, and our crisis is a European crisis.

“European democracy is [being] exanimated in how Europe will manage that crisis,” he said.