Home / WORLD / Standoff over Kosovo ‘going from bad to worse,’ Russia warns, calling on NATO to step up & prevent military conflict with Serbia

Standoff over Kosovo ‘going from bad to worse,’ Russia warns, calling on NATO to step up & prevent military conflict with Serbia 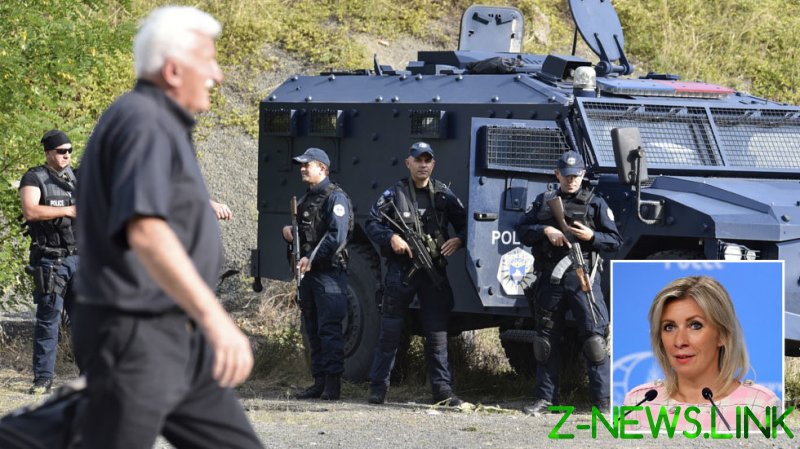 In an official statement issued on Tuesday, Foreign Ministry Spokeswoman Maria Zakharova said that growing tensions between the two sides are going “from bad to worse.” The top official also emphasized that NATO has taken it on itself to keep peace in the disputed region and cautioned that failure to cool the situation could lead to a dangerous escalation.

“NATO’s Forces for Kosovo and the EU’s Rule of Law Mission have their mandates to prevent lawlessness, and therefore they bear full responsibility for protecting civilians, ensuring peace and security,” Zakharova said.

Earlier this week, Serbian President Aleksandar Vucic threatened military action in Kosovo if the US-led bloc, which maintains a presence in the area, failed to take matters into its own hands before a row over the de facto shared border worsens. On Monday, NATO bosses announced they had increased patrols along the demarcation line as Belgrade ordered a detachment of armored vehicles to line up along the frontier.

Tensions in the region have run high ever since Kosovo declared independence from Belgrade in 2008, in a move not recognized by Moscow or much of the world. The conflict has however been reignited after officials in Kosovo prohibited cars with Serbian license plates from entering into its territory, forcing drivers to pay for temporary registrations. Vucic described the move as a “criminal action,” and the legislation caused fiery protests among ethnic Serbs, who allegedly set fire to one government office and launched grenades at another.

The decision is just another means for the “repressive” Kosovo state to “squeeze Serbs out of the region,” Zakharova blasted, while also saying that the breakaway region has not received “proper condemnation and rebuke” from either Washington or Brussels, which have championed its claims to statehood.

On Saturday, European Council President Charles Michel called for de-escalation and withdrawal of police units and barricades, and NATO forces have since been put on alert. However, foreign capitals have appeared reluctant to openly take sides in the row.

“It’s time to put some pressure on the administration in Pristina to compel it to withdraw the security forces from the north of Kosovo and prevent the situation from spiraling into an open conflict,” Zakharova concluded.