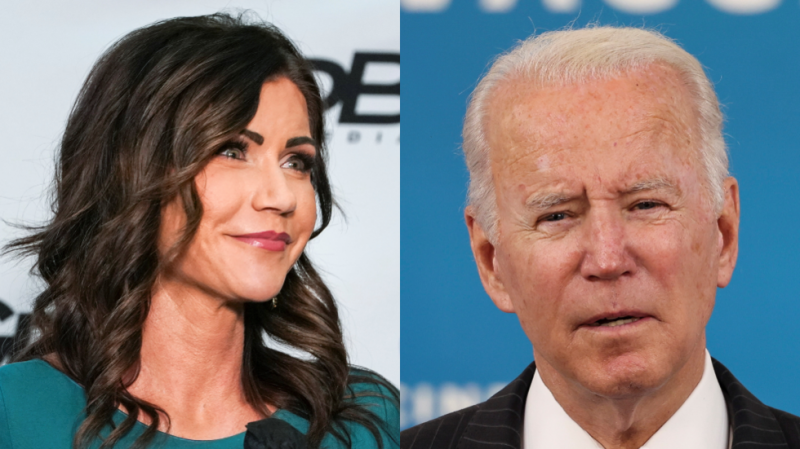 The Department of Labor’s Occupational Health and Safety Administration (OSHA) revealed the details of its vaccine mandate for the private sector on Thursday. Threatening companies with fines of up to $136,000, the mandate requires all firms with more than 100 staff to force their employees to get vaccinated against Covid-19, or submit to regular testing and masking.

Within hours, Noem announced that South Dakota would join several other Republican-run states in suing the Biden administration over the allegedly “unconstitutional mandate.”

“We will be taking actions to ensure that the federal government remembers that the Constitution does not give them the authority to take this type of action, and that people have freedoms, and they have personal responsibility over their health,” the Republican governor said in a video posted to Twitter.

Attorney General Jason Ravensborg’s office said Thursday afternoon that South Dakota has joined with Missouri and other states in the lawsuit, KELO Radio reported. The other states in question likely include Alaska, Arkansas, Iowa, Montana, Nebraska, New Hampshire, North Dakota, and Wyoming, all of whom joined South Dakota last week in suing the Biden administration over an earlier vaccine mandate targeting federal employees.

Noem has also issued an executive order barring state agencies and local government from requiring proof of vaccination from staff, customers or clients; as well as another order guaranteeing exemptions to anyone objecting to the jab on religious, or “moral, ethical, and philosophical beliefs or principles.”

The governor has not, however, issued a similarly strong order concerning private employers, claiming that she doesn’t “have the authority to dictate to a private business.” This hands-off approach to the private sector has earned her scorn from the right, and made her the target of legal action, too.

One day before Noem announced her lawsuit against the Biden administration, a group called Blue State Refugees, which represents Republican newcomers to South Dakota, sued Noem for allegedly denying them permission to protest at the State Capitol in Pierre next week. The group, whose members say they moved to South Dakota to flee onerous Covid restrictions in Democrat-run states, plan to stage a demonstration to force lawmakers into ensuring that private employers honor their requests for exemption.

Noem has said that she supports legislation to secure any employee’s right to secure an exemption, but any such laws would have to be drafted by the state legislature.