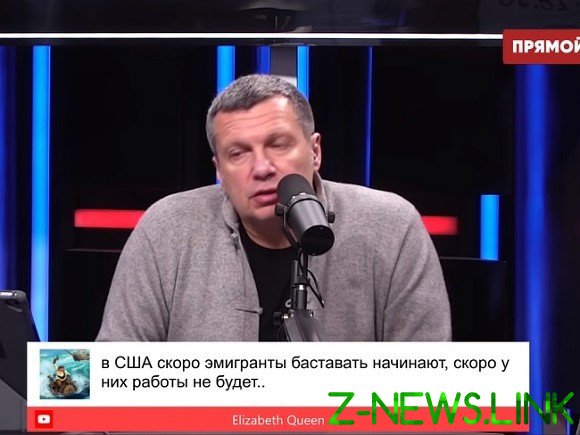 Solovyev tried to expose the lie the girl told about state aid in the United States. And that’s what happened.Propaganda is hard at work trying to prove the impossible — that “we” not worse than “they”.

Celebrationist Vladimir Solovyov did not like the video of TikTok Russian girl from new York. She told the camera, as the US government help people during a pandemic. Solovyov program on YouTube, “Soloviev LIVE” called her “happy fool”, and her story is nonsense.

It should be noted that the girl, her name is Lera, went a variety of videos about life in the US, but Solovyov drew attention to the video, where he talked about helping the American authorities to its citizens.

“The Russian woman, which tells us as well in America as she is happy, as everyone handing out the money. Look at this happy fool… the Girl turned out to be the usual liar. Thinks will earn yourself some points,” — said Solovyov.

Valerie herself said that her words came to the attention of Soloviev video no lie – all data are taken from local sources and from social workers.

“I just wanted to show how citizens of the country where I live. But I started to fly the accusations that I’m in your video from TikTok has not led any evidence about something not mentioned. Sorry, but this is absurd.”

In a new video girl in detail told about how the issue of money in new York. According to her, except for payments from the state, people help landlords to abolish rent or making a discount for the rental.

She also said that he had not denied the penalties for failure to comply with quarantine in the US that really are, but they concern only those who are infected with coronavirus and out into the street, knowing about the diagnosis.

In General, the Russian celebrationist accusing someone of lying, it is ridiculous and stupid. Just stupid to manage to tell a lie even in the accusations of lying.

It is clear that kremlebotam all kinds and grades now the task: in addition to the traditional lies about other aspects of the fight against the epidemic in Russia and the world, “work” information on the comparison of government assistance “we” and “they”. Because the Russian government look greedy and indifferent to the problems of citizens even in the face of some developing countries in the G20, not to mention the developed world.

This is understandable, because no matter how much I explain on TV that in USA all is bad with the epidemic of the coronavirus, but there is a decent amount of money gave to many people. And the biggest monetary assistance to Russia from the state amounts to 10 thousand rubles for the children. And somehow, before the age of 16. As if 16 they already stop eating and go to work. However, these 10 thousand still nobody saw, payment is promised only on 1 June.

In the US, if only for lump sum payments, given $1200 per person, $2400 per couple or $3,000 for a family of four. People with high income payments are not allowed. Total price of financial assistance in connection with the coronavirus economy and citizens from the U.S. authorities, will be $6 trillion. It is more than 30% of US GDP (If we take as a basis the figure for 2019 is 21.2 trillion dollars. Now, because of the pandemic, the US GDP is smaller and therefore the proportion allocated more money).

Russia has also reserved all crisis and protivoepidemicheskie spending 1.4 trillion rubles, which is about 1.2% of GDP.

Simply put, compared to the USA (not even in money but in shares), the Russians their power has contributed approximately nothing.

And Vladimir Solovyov and other “brain washers” are in their propaganda attempts to turn themselves inside out, but these numbers say about the attitude of the citizens in different countries about everything.