Display with an aspect ratio of 18:9 we’re used to seeing in the thin smartphones with the minimum dimensions of the framework, but today he was discovered in the new smartphone Blackview BV9000 Pro. This model is characterized by a rugged housing, and the frame of the screen here still there is due to the nature of the internal design. 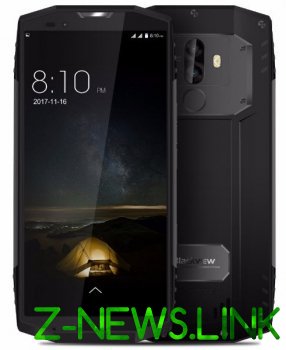 Smartphone Blackview BV9000 Pro estimated at $ 300, and the lion’s share of the sum will be paid for a firm shell and a Gorilla glass 5 front panel: bar is not afraid of blows, falls, and even water – in the presence of protection according to IP68 standard. The device characteristics include 6 GB RAM, 128 GB of internal memory and battery capacity 4180 mAh battery and the screen I got the aspect ratio 18:9, but its options are very mediocre – HD+ with a diagonal of 5.7 inches.

But Blackview BV9000 Pro has dual camera 13+5 MP and frontalka of 8 megapixels, and the processor uses an 8-core chip MediaTek Helio P25. Reportedly, the smartphone supports 24-watt charger, though to believe in it with difficulty, and he has a USB-C port, NFC and Android OS 7.1.1. The start of sales Blackview BV9000 Pro for $300 will be held in the coming days.