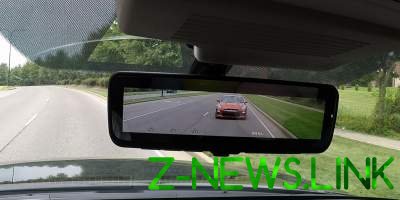 On the large SUV Armada will debut the I-RMW.

Nissan has announced a new system and Intelligent Rear View Mirror (I-RMW), which allows the driver to watch in cabin rear view mirror through the head high passengers or large loads that obstruct. About it reports a press-service of the Japanese brand.

In the mirror integrated special LCD screen, which displays the image from the rear camera. If the normal review interfere with people or Luggage, the driver can activate the system I-RMW using the switch at the bottom of the casing, after which the mirror will switch to monitor mode.

Function I-RMW debut on the big Armada SUV 2018 model year. The novelty will be offered in the U.S. market with only a 5.6-liter V8 engine that develops 390 HP and 534 Nm of torque. Motor is paired with a seven-speed automatic transmission. The SUV is available as a drive only on one axis, and four-wheel drive version.

Previously, Nissan announced a new security system called Alert Rear Door. Function is intended to remind drivers of the forgotten in the trunk of things or children left in the back seat. Rear Door Alert remembers whether you open the rear doors or the tailgate before the trip.

After the motor is turned off, but the door will not be opened again, the system will display a notification on the dashboard. System Rear Door Alert are standard SUV Nissan Pathfinder 2018 model year.