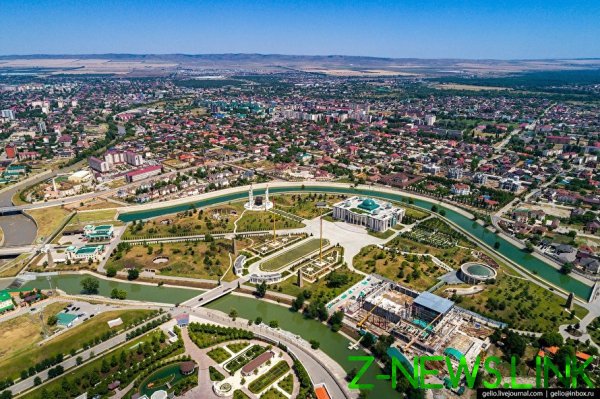 Photographer from Novosibirsk Slava Stepanov has published on his page in LiveJournal photos taken in Grozny from the height of bird flight. The footage he captures the city’s main attractions — the area of the Akhmad Kadyrov mosque “Heart of Chechnya,” Putin Avenue, floral Park, the business complex “Grozny-city” and the residence of the head of Chechnya, Ramzan Kadyrov.

Users of social networks was particularly struck by the photograph of the residence of Kadyrov. It is built in the Palace style, it is surrounded by a Park with lawns and flower beds, and water channels. Informed to “Novaya Gazeta” wrote that the building of the residence of the head of Chechnya comparable to the Winter Palace in St. Petersburg. It was reported that the construction and arrangement of the building up to 2012 spent about 10 billion rubles.

Every year the government of the Chechen Republic conducts several auctions for services to the residence of Kadyrov. In 2018, the year, the total initial cost of these contracts, according to the “Open media” over 85 million rubles.

In an interview NGS.ru Stepanov said that he had visited Grozny this summer. “In General the city is very well maintained. I would say that in the Caucasus it is the most accurate. It is seen that there is more money other [than other cities]. I drove the entire Caucasus from Dagestan to Mineralnye Vody, but the improvement is striking terrible that is. But it seemed to me that some skyscrapers are not habitable,” notes the photographer, and added that it had been struck by the prospect of Vladimir Putin.

“When you see the sign “Putin Avenue”, a little strange. He called the name of the person who is alive and still working, and already his name prospect named. This is only in Kazakhstan can be found”, — he said.