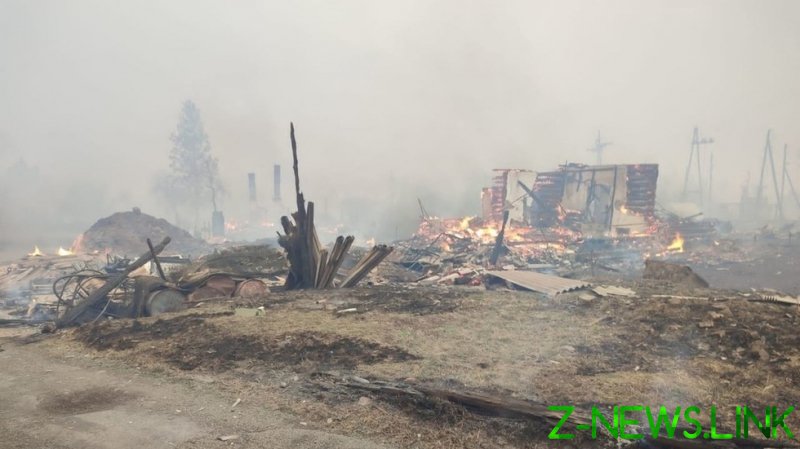 At least 17 people were reportedly injured in the fires, and 14 have been hospitalized, according to TASS news agency. Russia’s Krasnoyarsk region was also buffeted by high winds on Saturday and its capital, Krasnoyarsk, even witnessed a dust storm.

Over 480 buildings in the province have been ravaged by the fires, the regional Emergencies Ministry office told RIA news agency. Some 350 buildings have burnt to ash, Komsomolskaya Pravda newspaper reported, citing the emergency services.

Photos and videos on social media show entire settlements engulfed in flames, as plumes of thick black smoke billow over the houses. Other images show the aftermath of the disaster, including dozens of burnt-out cars and vast territories devastated by the inferno.

High winds have fanned the rapid spread of wildfires. According to Russian media reports, wind speeds in the Krasnoyarsk region reached 40 meters per second. Stormy weather has also reportedly damaged some power lines, causing at least some of the fires.

Powerful winds have also prevented the emergency services from using specialized aircraft to douse the flames, the regional Emergencies Ministry has said.

After Krasnoyarsk was hit by a dust storm, Governor Aleksandr Uss declared a region-wide state of emergency. Over 800 firefighters with heavy equipment have been deployed to tackle the ongoing fires, according to the media.

Late on Saturday emergency services reported that all the fires in the region had been contained and the further spread prevented. Two dozen towns have been affected by the disaster, according to the authorities. The extent of the damage is still being assessed, but according to some media reports, at least one settlement has been turned to ash, with no building left standing.