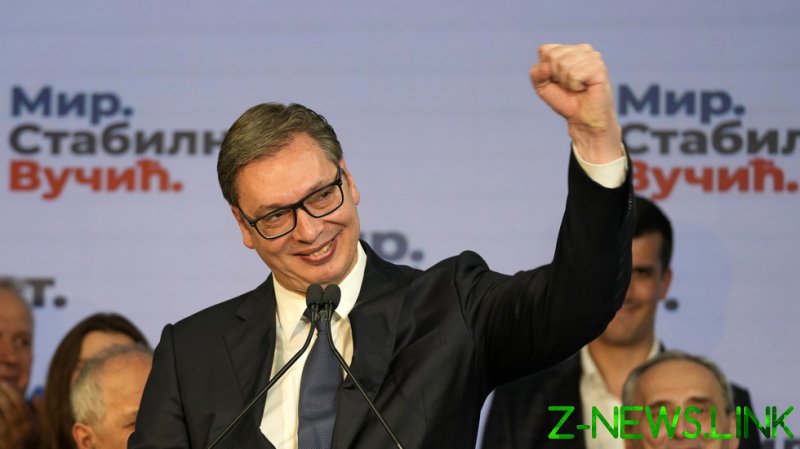 Serbian President Aleksandar Vucic has declared himself the winner of Sunday’s presidential election, as polls close and an early projection places him far enough ahead to avoid a runoff election. An analysis by the Center for Free Elections and Democracy has given Vucic 59% of the votes, a comfortable margin of victory.

Speaking from his party headquarters, the incumbent leader declared “Serbia will remain on the European and reformist path, but also friends with Russia and China.” The country is currently in the process of joining the EU, but has declined to cut off all relations with Moscow amid the conflict in Ukraine, unlike many of its NATO-member neighbors.

While Vucic’s Progressive party appears to have fallen short of the 50% in parliament it would need for a clear majority, instead projected to win some 43% of seats, it is likely to form an alliance with the Socialists, with whom it has worked in the past. The United for Victory of Serbia opposition alliance looks set to trail significantly with just 13% of votes.

Some 50.82% of registered voters turned out to cast their ballots by the time polls closed at 8pm local time. No serious voting irregularities were reported by the State Election Commission, and official results are expected to be revealed on Monday.

As in neighboring Hungary, which also held parliamentary elections on Sunday, Serbia’s opposition attempted to paint the incumbent as a Russian puppet, even as most Serbians support neutrality for their country – especially given deep-seated resentments of NATO arising from the alliance’s 1999 bombing campaign.

While Vucic joined most European countries in condemning the Russian attack on Ukraine in the United Nations, he has not followed them into the all-out sanctions pile-on, noting that Belgrade depends on Moscow for much of its energy and other resources and to impose draconian sanctions could backfire significantly.