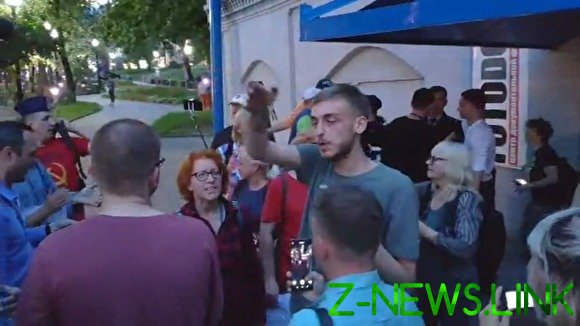 The participants of the Pro-Kremlin movement SERB tried to disrupt the conduct of human rights training at the Sakharov center in Moscow, according to the telegram-channel “Flowers for him”. According to unconfirmed information, the number who came could also be representatives of the National liberation movement (NOD).

A channel administrator Vera Oleinikova said “OVD-info” that it is just about 15 provocateurs, who called the police, and when investigators arrived, argued that human rights defenders sponsored by the state Department.

“Echo of Moscow” with reference to the organizers of the training reports that come activists poured into the room of an unknown substance and shouted: “Maidan will not pass”. In the end, the participants moved to another room.

One of the speakers at the seminar “Vintage Russian” Irina Yatsenko told to “Mediazone” which came appeared during the interactive part, where participants imagined themselves in the role of protesters at the rally apprehended by the police. According to Yatsenko, was dispensed substance, odor reminiscent of feces.