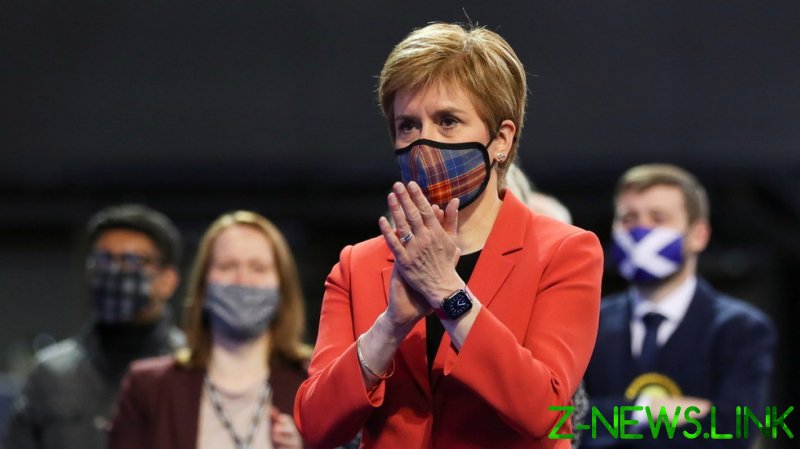 With counting still underway in Scotland’s parliamentary election, Sturgeon’s is on track for a fourth term as first minister, winning 62 out of 86 seats declared thus far. However, 129 seats are up for grabs, and owing to Scotland’s convoluted voting system, Sturgeon’s Scottish National Party is likely to fall short of an outright majority.

Still, with her party set to remain the largest in Holyrood, Sturgeon already has her eyes on another independence referendum. She warned Prime Minister Boris Johnson on Saturday that should “any Westminster politician” try to block such a vote, they would be “picking a fight with the democratic wishes of the Scottish people.”

“You will not succeed, the only people who can decide the future of Scotland are the Scottish people,” she told reporters.

Even if Sturgeon is left without an overall majority, she could easily recruit the Scottish Greens to back an independence referendum. As of Saturday afternoon, the pro-independence Greens had picked up enough seats to give Sturgeon majority support for an independence vote.

Sturgeon previously touted an SNP majority win as a mandate to hold a second referendum, but SNP deputy leader John Swinney revised this claim in an interview with BBC Radio 4 on Saturday morning, in which he claimed that a pro-independence majority would be mandate enough.

“I’m certain there will be a majority in the Scottish parliament of people who are committed to the holding of an independence referendum on the future of Scotland,” he said.

Johnson, who can authorise an independence referendum with a special order, has given no indication that he will do so. Speaking to the Telegraph on Friday, Johnson said that holding another referendum would be “irresponsible and reckless,” adding “my impression was that [the SNP] moved away from the idea of a referendum, and I think very wisely.”

Johnson would not be the first Conservative prime minister to swat away Sturgeon’s talk of independence. His predecessor, Theresa May, blocked an independence vote in 2017, declaring “now is not the time” for a re-run of the 2014 referendum, in which 55% of Scots chose to remain in the Union. That referendum was granted by Conservative Prime Minister David Cameron, who also authorised the 2016 Brexit vote.

Sturgeon is apparently in no mood to ask permission from London, however. She told ITV on Friday that Holyrood will decide when to hold another referendum, and Johnson will “have to go to the Supreme Court to challenge it.”