Home / Video news / Schwarzenegger made an unexpected confession about the Klitschko brothers. Video

Schwarzenegger made an unexpected confession about the Klitschko brothers. Video 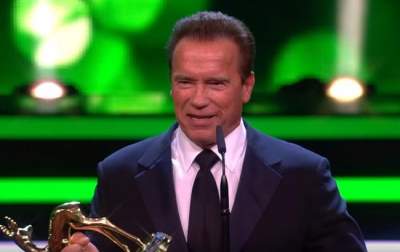 American athlete, actor and politician Arnold Schwarzenegger made an eloquent speech in honor of the brothers Klitschko during the presentation of the prestigious German Bambi award-2017.

“I usually hate people who are taller than me. But I love the Klitschko brothers. They are great athletes. And they are very smart. They love to return the people back. They not only take but also give,” he said. Video: speech by Arnold Schwarzenegger on Bambi-2017 (Youtube/ARD) After hearing Wladimir Klitschko thanked his friend for the nice words and said that without support it is hard to achieve anything.

“Victory can not be without allies. Without friends like Arnold, like my parents, as a battle brother, as my fans. Without them I would not have reached the heights of those that I was subjected to,” said Klitschko. Note that Wladimir Klitschko has received the award Bambi 2017 in the field of sports. By the way, earlier worldwide famous Ukrainian boxer Vladimir Klitschko, speaking in heavy weight category, again entered the ring. The corresponding video published on the page of the former champion in the social network Instagram. Klitschko showed the first over a long period of training, and reported that is in excellent shape.

“Hello, people! It is nice to know I still goes. Nothing to speculate,” wrote 41-year-old athlete under the video.