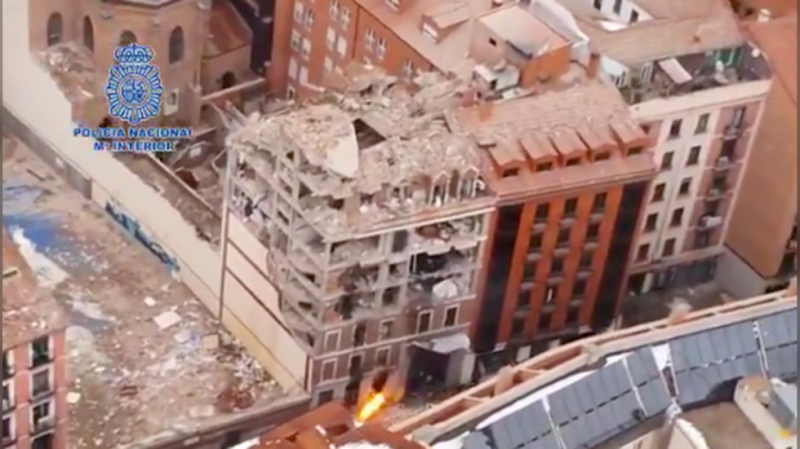 Police dogs are being deployed to help search the wreckage of a huge explosion in central Madrid, caused by a suspected gas leak that left at least three people dead and 11 injured.

Spain’s national police said they will send in 120 specialized officers, including forensics and explosives experts, to search the blast site once it is secure, in order to determine the exact cause of the explosion.

The blast, which struck at around 3pm local time, ripped through the upper four stories of a building owned by the Archdiocese of Madrid in Toledo Street. The building neighbors the Virgen de la Paloma church and is close to a school and an old people’s care home.

The police helicopter footage shows that the roof of the building had caved in, with damage visible on every floor, as well as in the street below, where parked cars could be seen obliterated after the blast.

From Thursday morning, cranes will also be brought in as authorities carry out a controlled demolition of the remaining structure of the stricken building.

The Emergency Services Department of Madrid has confirmed the deaths of three men in the blast, including David Santos Muñoz, a 35-year-old electrician and father-of-four children, who was a member of the local parish.

President of the Community of Madrid Isabel Díaz Ayuso said it had been “another difficult day” for the city, while confirming that students of the school and elderly residents of the care home were safe.

The gas boiler thought to have caused the blast had apparently not been working in the days prior to Wednesday’s incident, but snowfall from Storm Filomena had reportedly prevented repairs being carried out, according to Spanish newspaper El Pais.

Gas was still burning in a controlled manner inside the building at 7pm local time, according to an emergency services spokesperson, with firefighters still stationed at the site.