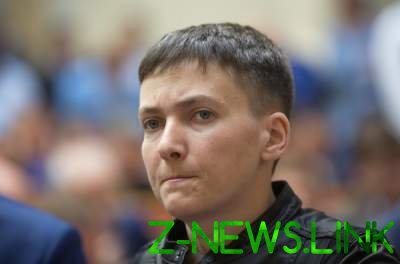 The MP told how the fighters shook hands.

The statement was made in an interview to “Belarusian partisan”.

“Television has accustomed us to the fact that any negotiations begin photo shoots, with a handshake and only after that the negotiators go into a closed room. Nothing like we had. Met with Zakharchenko and Carpentry we are quite cold, shaking hands at that moment could not be and speeches,” the MP said.

She added that going to negotiate with Zakharchenko and Carpentry, “overcome himself”.

“With a Carpenter in 2014 we shot each other, and with Zakharchenko actually met in person. But at the end of the negotiations, when we came to the agreement on exchange of prisoners, when I realized that they want to bring people back alive, do not try to make it long, we shook hands. While I felt some of inspiration, as sometimes that’s necessarily true, or, conversely that you cheated. I just thought that they have a desire to exchange all for all,” – said Savchenko.

The MP also suggested that the leaders of the “L/DNR” is not subject to Russian President Vladimir Putin.

“The meeting took place without Putin. We talked the three of us without other people. I don’t tend to think that the person is not independent. Water overflows when it is filled with something. I’m sure that even those people who are completely dependent on someone can get out of control. We have seen it time and again,” she said.

In addition, Savchenko said that her meeting with Zakharchenko and Carpenter helped to organize the representatives of the Belarusian KGB and Russian FSB.

“Of course they (secret services. – Ed.) know (about the meeting. – Ed.). Of course, the representatives of the Russian FSB and Belarusian KGB helped to organize this meeting. I’m not familiar with Lukashenko, ‘ve never even seen. Therefore, whether he did it (leaked the information about the meeting. – Ed.) or his subordinates, can not say. But the reality is that information about the meeting appeared in the press only two days later. I’m still surprised that lasted this long silence. And, as I understand it, this was done for public relations of Belarus as a beautiful grounds, where peace negotiations. Let’s call it so,” summed up the MP.