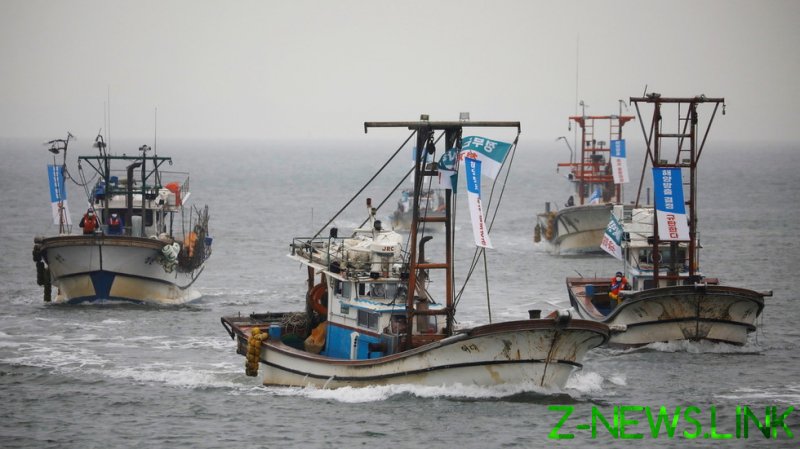 According to Korea’s National Federation of Fisheries Cooperatives, around 800 fishermen participated in demonstrations on Friday. Fishing boats set sail from nine ports across the country, protesting near the shore, chanting slogans and holding banners aloft.

Slogans such as “withdraw Japan’s decision” and “condemn irresponsible nuclear attack” were chanted by the fishermen, who also adorned their vessels with anti-Japan banners.

One fisherman, Park Re-seung, chief of Yongdu-ri fishing village, who said his father had fished in these seas and he intends for his son to follow in his footsteps, questioned Tokyo’s commitment to maintaining the health of the ocean. “Why is Japan doing this? How could they do such a bad thing against the sea? Don’t they eat fish?”

The demonstration comes as Japan refuses to respond to widespread criticism from its neighbors regarding its decision to release more than a million tons of nuclear wastewater from the defunct Fukushima plant into the ocean within a couple of years.

Last year, Greenpeace reported that the wastewater from the plant was more dangerous than the Japanese government had suggested. The organization’s publication claims the supposedly treated water still contains “dangerous levels of carbon-14,” a radioactive substance that has the “potential to damage human DNA.” The water is also known to contain radioactive tritium.

Beijing has pushed for international action and called on Tokyo to consult its neighbors, noting “it is definitely not Japan’s housework. If the nuclear sewage is not polluted, why doesn’t Japan keep it for itself?”