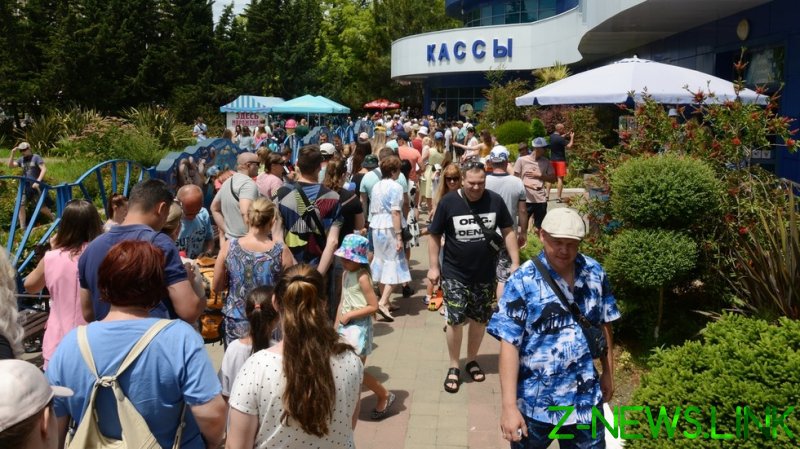 In an article published by the downmarket outlet last week, a grim picture was painted of the top tourist destination’s current prospects. Beset by Covid-19 cases and cancellations, businesses were apparently struggling and its beaches had fallen quiet. The Krasnodar Region in which it is located has demanded that all visitors staying in hotels must present proof of vaccination.

Penned by Anna Nemtsova, its Moscow correspondent, the piece argues that “the majority of Russians still feel skeptical about the Sputnik vaccine and it seems they would rather spend summer in stuffy Moscow, breathing smoke from burning wood.”

While no reports of forest fires in Europe’s largest city appear to have surfaced since the article was published, large numbers of outbound tourists do appear to be setting course for countries like Turkey and Cyprus, where they can travel with only a negative PCR test. Likewise, many will escape the heat of the capital for dachas in the surrounding region, where they may well light fires and roast meat outdoors.

Nemtsova has a history of embellishing stories about the city. Back in 2016, she claimed that local pensioners were fishing at the local port to earn extra money. This wasn’t true. In reality, they were local angling enthusiasts, many using expensive equipment.

At the same time, predictions of Sochi’s decline as a destination do not yet seem to have come to fruition. A video from Moscow’s Sheremetyevo Airport on Saturday showed a long line of holiday-makers jetting off for the sunny south coast city. Not only do vaccinated Russians have the ability to travel around the country normally, those without proof of having had a jab can still stay in rental apartments and other accommodation.

Although the Daily Beast has claimed that up to half of all flights to Sochi could be canceled, in reality large numbers of planes queued up for landing spots and it appears that only one commercial flight was scrapped, forcing its passengers to take another plane before they could start their holiday.

Likewise, the pictures used to illustrate Nemtsova’s article gave a bleak and dreary impression of the resort city, taken next to a pier on a short stretch of stony coast. One or two people languish on loungers, but most remain empty. It might be a sorry scene, but it likely isn’t an accurate one. Instead, snaps taken just along the seafront, at a popular spot for swimmers and sun worshipers reveal that, even in the middle of the week, the beach is bustling with people undeterred by the pandemic.

As it happens, Sochi was hit by storms on Sunday or Monday, of this week, causing hundreds of thousands of dollars in property damage, and the loss of at least one life. However, on Tuesday morning, the sun had returned and beaches were reopening.