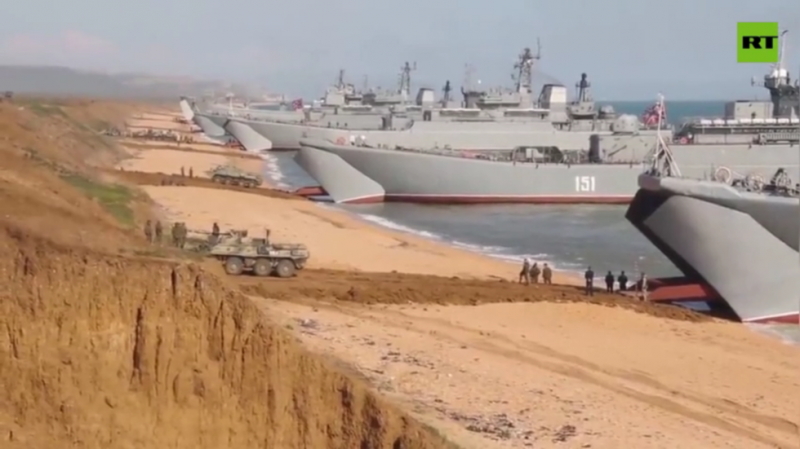 Footage released by the Ministry of Defense showed tanks being loaded onto amphibious landing ships after taking part in exercises on the Crimean coast. Other shots featured soldiers loading armored vehicles for transport.

On Thursday, Russian Defense Minister Sergey Shoigu announced that personnel deployed in the west and south of the country had passed a series of readiness checks after being deployed. According to him, “the goals of the sudden inspection have been fully achieved. The troops demonstrated their ability to ensure reliable defense of the country.”

As a result, he has since ordered commanders to “plan and begin the return of the soldiers to their places of regular deployment, beginning from April 23.” By the end of the month, Shoigu said, “the personnel of the 58th Army of the Southern Military District, the 41st Army of the Central Military District, the 7th, 76th Air Assault and 98th Airborne Divisions of the Airborne Forces” will return to their normal bases.

The buildup of manpower and hardware near the border with Ukraine had sparked alarm in Kiev, which suggested the move could be a precursor to a full-blown invasion. Its officials have reached out to the US-led NATO military bloc to step up its presence in the region, and Washington has reportedly been considering an expansion of the weaponry shipped to Ukraine, potentially including missiles and anti-air armaments.

Fighting between Kiev’s forces and soldiers loyal to two breakaway republics in the east has escalated in recent weeks, and Moscow has warned it could intervene to prevent a full-blown humanitarian catastrophe.