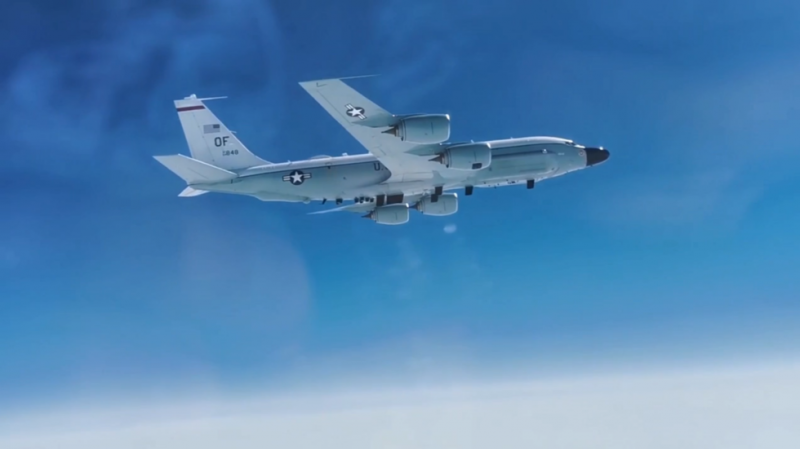 A spokesperson for the department revealed that the Russian MiG-31 jet “took off from an airfield in Kamchatka to identify [the American plane] and accompany it. The fighter pilot identified the target as a strategic reconnaissance aircraft RC-135.”

The ministry confirmed that the spy plane, equipped with high-tech reconnaissance equipment, had not violated the border and was escorted along its flight path. After the US pilot set a course away from the Russian mainland, the fighter disengaged, reports say.

The incident comes amid a series of diplomatic spats between the two countries. On Thursday, American President Joe Biden signed a decree introducing new sanctions against Russia, banning US companies from directly purchasing shares in Moscow’s foreign debt and expelling ten of its diplomats from Washington. The Kremlin is understood now to be preparing its own measures in response.

In November last year, a notorious US warship, the USS John McCain, was intercepted by Russian sailors who threatened to ram it. Moscow claims it was picked up more than two kilometers inside its maritime boundary, which American naval chiefs dispute. Washington claimed that the alleged incursion was part of a “freedom of navigation operation [to uphold] the rights, freedoms, and lawful uses of the sea recognized in international law by challenging Russia’s excessive maritime claims.”

READ MORE: Spies near our skies! Russia reports MORE THAN A THOUSAND foreign reconnaissance flights near its borders over course of 2020

Last year, Russian air defense crews said that they had picked up more than a thousand foreign reconnaissance flights near the country’s borders. Moscow has also accused the US and members of the NATO military bloc of conducting “provocative” aerial exercises across Russia’s frontiers in Eastern Europe.