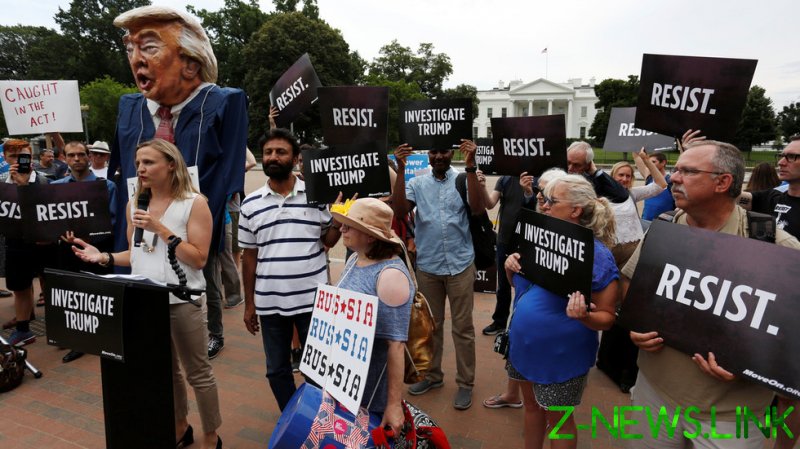 A last-minute development before the November election is somewhat of a tradition in US politics, so much so there’s a name for it – “October surprise” – going back to 1980 or so. In 2016, it was supposed to be Donald Trump’s ‘Access Hollywood’ tape, only to be overshadowed by the WikiLeaks publication of Hillary Clinton campaign chair John Podesta’s emails – which Democrats later blamed on Russia.

This time it seems to be the New York Post story, citing emails from a laptop found in a Delaware repair shop to claim that Democratic presidential nominee Joe Biden knew about his son Hunter’s involvement with the Ukrainian gas company Burisma.

Hunter’s Burisma job was not exactly a secret, but the emails suggest his father – Barack Obama’s vice-president at the time – was aware of it, which Joe Biden had previously denied. The absolutely unhinged reaction of the media and political establishment to the Post story suggests it hit close to home.

Facebook declared it would suppress it until it was vetted by “independent fact-checkers.” Twitter labeled the link to it “unsafe.” Mainstream media journalists who dared mention it at all, even to criticize, got piled on as if violating a mafia code of silence.

It did not take long for the same people who pushed the ‘Russiagate’ conspiracy theory for years to do it again, claiming that the documents obtained by the Post were really from a “Russian hack.”

The Biden campaign hasn’t actually challenged the authenticity of the emails and the photos – merely asserting that the meeting involving the VP and a Burisma executive referenced in an email wasn’t on any “official schedule.” No matter, the talking point that Russia “hacked Burisma in January” and was somehow the source of the documents was seriously making the rounds on Wednesday afternoon.

Mind you, this comes after the media establishment completely ignored the revelation that the FBI was using them – as in, media reports – to “corroborate” claims in the Clinton-funded Steele Dossier, which British spy Christopher Steele seeded in the press himself. It was a shocking example of circular reporting and comprehensive failure of both law enforcement and intelligence.

Steele’s dossier was used to get warrants for spying on Trump’s campaign, which then continued for almost a year after the 2016 election – even as the FBI knew the dossier was bogus. All of ‘Russiagate’ was based on this. Since peddling it has made many a career, book deal, miniseries, Pulitzer prize and fortune, however, the response by the people involved has been… crickets.

Actual journalists would have at least asked why these Hunter Biden emails are being released now, if “Russia” supposedly got them in January – at the peak of the Democrats’ attempt to impeach President Trump. After all, their principal argument was that Trump was “soliciting foreign interference” in the US election (!) by telling Ukraine it should investigate Hunter Biden’s dealings with Burisma and the circumstances of the firing of a state prosecutor reportedly looking into it. Mind you, this is with Joe Biden on the record boasting about getting the prosecutor fired.

What was the FBI doing for the past year, just sitting on evidence that a Burisma official literally asked Hunter to “use your inﬂuence to convey a message/signal” to protect the company from the government in Kiev? It sure seemed pertinent to the whole impeachment business.

You won’t hear these questions asked by the mainstream US media, though. They are literally insisting it’s all false, there’s nothing to see here, move along. Russia!

In what certainly seems to be cosmic irony, on the same day the New York Post published the Hunter Biden documents, the New York Times did a puff piece on how Trump’s alleged call for Ukraine to investigate Burisma was used by the Biden campaign to launch its fundraising into orbit. It was the first major boost to the former VP’s campaign, which was anemic at best up to that point.

Sure sounds as if Biden and the Democrats had the motive and opportunity – and control of the House and the media gave them means as well – to manufacture a scandal that could be used to harm Trump and help Biden at the same time.

Except the mainstream media isn’t interested in even asking that question, instead reverting to screaming “RUSSIA” as they have over the past four years.