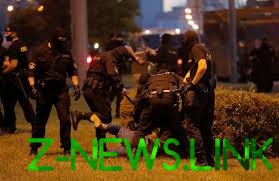 “The police tried to peacefully stop the riots”

Russian Federal TV channels is very sparingly told about the situation in Belarus, where after the announcement of the state exit polls all night continued violent clashes of protesters with security officers.

So, in the morning newscast on “Russia 24”, correspondent Elizabeth Khramtsova said that the acting head of the Republic Alexander Lukashenko believes is leading in the elections. When the host asked her what the situation on the streets of Minsk and in General in the country said the following: “In the court of six in the morning, there are very few cars, almost no people on the streets. Our crew was stuck in another part of town, not in the center where we were to stay at the hotel, and where we worked throughout the evening, because it was almost paralyzed car traffic”.

Despite the fact that the crew are “stuck” in the middle of it, no footage of the collision has not been demonstrated.

“In the center of the Belarusian capital began an unsanctioned rally. The night before, closer to 10 o’clock, quite a number were out of town, and night was even reported that the Ministry of the interior holds a meeting of the operational headquarters on the situation with the unauthorized rallies. Any statements on this session was not done, but closer to the morning there was a message from the press Secretary of the Ministry. She reported that the police were forced to use special means against the rioters. Used machinery and stun grenades, there are detainees, the security measures in the city stepped up, the situation is under control. According to their observations, I can say that about 3 o’clock in the morning people started to leave, stopped to honk the car. It’s morning, the streets are almost empty,” said the journalist.

The following news release reiterated about the “controlled situation”.

On the NTV channel said the high voter turnout and showed footage of clashes with police. According to the leader, “the police tried to peacefully stop the riots”, but this failed, then in the course went “water cannons, stun grenades and pepper gas”. About rubber bullets said nothing. “For this moment the situation was brought under control,” — said in the story.

Well, the most amazing story came out this morning on the First channel (7:00 Moscow time). Here at all not a word is said about the riots. Just announced that Lukashenko, according to preliminary results leads in the elections.

All night in Minsk and other Belarusian cities continued violent clashes between police and protesters who disagree with the results of the elections of the President of the Republic: according to the CEC, the winner is Alexander Lukashenko. Thus, according to the exit polls of the headquarters of his main opponent Svetlana Tikhanovski, and judging by the protocols of the PECs, leading Tikhanovski.

Thousands of people took to the streets, riot police opened fire on them with rubber bullets and threw stun grenades.