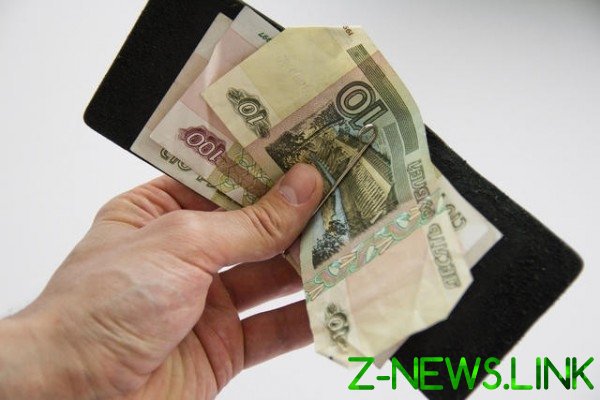 Most of the workers looked forward to two days each month: the day of the advance for wages. In this series disappear without a trace, months, years, and entire human life. Capital hangs in front of his nose “carrot” comfortable and convenient life for money, but eager to give them less and less, to more resources to leave to his beloved. Here are the roots of all crises of overproduction. Today we are in one of them. Such crises are resolved in one way — the destruction of the productive forces and means of production: war, hunger, extermination… of wage arrears is the first small sign of a storm.

Urals Federal district:
According to a report from Rosstat, the enterprises of the district owed employees of 72.7 million (+83,9%). A month earlier, the debt amounted to 39.5 million rubles.
In particular, the arrears of the Tyumen region, KHMAO and YANAO remained unchanged — the company’s entities have employees 4.6 million rubles. Interestingly, the entire amount is accounted for KHMAO. In particular, debt is available to employees of the construction sector in the Rainbow.
In the Sverdlovsk region arrears of wages increased two times and amounted to 64,6 million. In the Chelyabinsk region employers owe — 3.6 million rubles. Over the past month the indicator has not changed. In Russia as a whole , the total wage arrears are more than 2.2 billion rubles. Compared to 1 January 2020, the debt grew by 6.5%. Salary are unable to 33.8 thousand citizens of the Russian Federation.

Perm Krai:
Total wage arrears in the Perm region has increased, according to March 1, amounted to slightly more than 27 million rubles. The number of workers to whom a debt amounted to 596 people.

In addition, it became known that workers Perm JSC “NPO Gorneftemash” that since the bankruptcy of enterprises still have not paid debts on a salary. Now, pay employees directly dependent on the sale of the company’s assets in bankruptcy.
Based on the materials of the case, in August 2019 the obligation of JSC “NPO Gorneftemash” to the creditors were: first place — 1 million 675 thousand rubles, second place — 4 million 424 thousand rubles, including wage — 2 million 180 thousand rubles, third place — 2 million 639 thousand roubles, the fifth place — 6 million 772 thousand. As a short answer to the question: “is there a High chance of the employees to get their salary arrears? “— the competitive managing Maria Leonhard: “High. Now in the insolvency of the company enough to put up for auction of property.”

Republic Of Karelia:
Reports Kareliastat: the amount of overdue arrears of wages in large and medium organizations of the examined types of economic activity amounted to 45 million 643 thousand rubles. The number of employees and average payroll of the composition to which there are arrears amounted to 787 people.

The Republic Of Tatarstan:
Overdue wage arrears in Tatarstan is more than RUB 65 million, according to Tatarstanstat data there were commissioned. For this indicator, the Republic took the first place among regions PFO. The second is Bashkortostan from 44.7 mln. Three closes Kirov oblast (42 million rubles).
All debts owed to employees in Tatarstan has accumulated in the absence of their own money of enterprises and organizations. The number of employees to whom were overdue arrears of wages at the beginning of the year amounted to 881 people. The highest debt recorded in the manufacturing sector of Tatarstan. There the sum amounted to 56.7 million rubles. Enterprises in this sector have accumulated debts to 786 employees, said the Agency.

OOO “Rosnefteimpex” Leninogorsk region of Tatarstan partially extinguished debts under the salary before the workers. 33 the employees of LLC “Rosnefteimpex” Leninogorsk region of Tatarstan was paid 2 million 478 thousand roubles. According to the information on March 3, the company “Rosnefteimpex” owed employees more than 12.8 million rubles. Salary employees of the company did not receive from February to August 2019. Wage arrears after the intervention of the Supervisory authority of the enterprise repaid. Previously, “Kazanskie Vedomosti” reported that wage arrears in Tatarstan declined by 1 million 212 thousand rubles.

“Cheremshan agricultural services” has fully repaid the arrears of wages after intervention of the district Prosecutor’s office
— During check it was established that before the 74 employees of the company “Cheremshan agricultural services” includes salary arrears and other statutory payments in the amount of 876 thousand rubles, — said the assistant Prosecutor of area Alexey Krutikov.

Krasnoyarsk Krai:
In Krasnoyarsk region rising debts on wages. During the first month of 2020, the figure had almost doubled and became record for last 12 months.
According to the regional Department of statistics on February 1, the debt level has reached 124.7 million rubles, while a month earlier it amounted to 70.7 million rubles. The number of workers not receiving wages on time, has increased on 33,8% — to 2.3 million people, and the number of organizations debtors increased by 2 units to 26.
Among businesses experiencing such difficulties, a large part applies to the areas of real estate management (35,4 million roubles), manufacturing industry (28.7 million rubles), construction (almost 28 million rubles), agriculture and logging (13.2 million rubles). The debtors are also in the sectors of electricity and gas, transport, education, water and removal of wastes, but the volumes of debt in each case do not exceed 10 million rubles.
The current amount of debt is a record in the last few years. According Krasnodarstata, this figure reached 100 million rubles. The highest was the duty as at 1 December of the past year — about 94 million rubles, and the lowest — on June 1 — less than 60 million rubles.

Dagestan:
According to territorial body of Federal state statistics service in Dagestan, the debt was formed from-for absence at the enterprises of own means.Total wage arrears in Dagestan amounted to 25.4 million rubles. For two months the debt increased by almost $ 6 million.
According to the information on the first of December last year, the total overdue debts of the organizations on wages, excluding small businesses accounted for about 19.7 million rubles. Per employee – 110 thousand rubles. The debt originated in the manufacturing sector. The reason is the untimely receipt of means from budgets of all levels.

Tver oblast:
Since September of last year the municipal enterprise “ATP Bielsko” there were arrears of wages to family workers. Only after intervention of bodies of Prosecutor’s office of administration, Bielsko district were given a grant in the amount of 539 thousand rubles to repay the debt, as well as align the financial situation of the company, i.e. repayment of the debt on tax payments.

Lipetsk oblast:
The Prosecutor’s office, terbunskiy district, addressed the employees of LLC “Remstroyservis” on the question of infringement of terms of payment of their wages. As it became known, the company in connection with untimely payment of salaries for January of 2020 formed a debt of $ 457 thousand rubles.
I must say that in 2020 this is not the first company that came to the attention of the Prosecutor’s office due to unpaid wages. The dobrovský district Prosecutor’s office conducted an audit on the collective appeal of employees of OOO “Lipetsknefteprodukt” and found out that they owe 160 thousand rubles salary. Earlier it was reported that in October 2019, the Prosecutor’s office has carried out an inspection on the same treatment. After the adoption of measures of public Prosecutor’s reaction payable to employees paid. However in January 2020, the situation repeated itself: the company actually carries out its business activities. The result is a debt in the amount of 160 thousand rubles.

The employees of OOO “Vikma” the employer began to pay the salary arrears after the intervention of the SU IC of Russia in the Lipetsk region. The investigation established that the Director General Vikma, specializing in the production of plastic products, in the period from September 2018 to may 2019 has not paid the salaries of 24 employees in the amount of more than 2.5 million rubles. The General Director of open company Vikma, according to investigators, possessed of funds sufficient to pay salaries, but spent them for various household needs and payments to suppliers and creditors.

Tyumen oblast:
“Specialized construction management-6” is not listed the salaries for December 2019 and the first half of January, 2020 in the amount of more than five million rubles. Only after the Prosecutor’s intervention, the wage arrears in the organization was extinguished, reported the press service of the Prosecutor of the Tyumen region.

In Tobolsk paid the debt on wages in excess of 4.5 million rubles. This is the result of checking compliance with the labour legislation in OOO “Patronato” on Prosecutor’s office.
– It is established that the organisation has not paid salaries in December 2019 and January 2020 in the amount of 4.5 million rubles, – said the press service of the Prosecutor of the Tyumen region