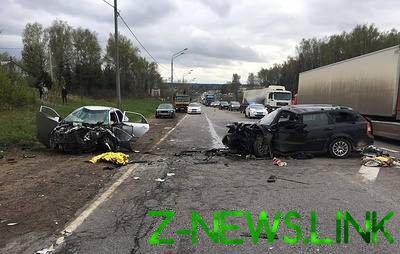 One child was killed.

In Russia in the Kaluga region, 94-th km of highway M-3 “Ukraine” had four cars.

According to preliminary data, the driver Тоyota, leaving a different number, at a tangent collided with a car Daewoo Nexia, but crashed into a Chevrolet Lacetti, going ahead in the same direction.

In turn, the Chevrolet drove into the oncoming lane, where it collided with a Toyota Corolla under control of 29-year-old woman.

In result of road accident the woman driver and her seven passengers, including six children aged one to 12 years were injured, the most serious damage was the 12-year-old girl, she is in intensive care. Also injured the driver of the Chevrolet.

Later, the police said that one child was killed.

“Died a child born in 2013”, – said the representative of the Ministry of internal Affairs of area.