The Russian coast guard began to artificially delay the trial before the entrance to the Kerch Strait.

Russia this week has dramatically changed the tactics of the blockade Ukrainian ports and ceased to hold court in the sea of Azov. However, it drastically increased the length of artificial delay of vessels at anchor outside the Strait of Kerch, reports the editor in chief BlakcSeaNews Andrey Klimenko Facebook.

“From 14 to 19 July (as of 20:00) the coast guard of the FSB had not detained any vessel directly into the sea. However, in the same period of time dramatically increased the duration of artificial delays of vessels at anchor in the sea of Azov before the entrance to the Kerch Strait. Note that all of these ships with cargo. In previous weeks, the average length of artificial delay was 21-23 hours, from 14 to 17 July, it was 59 hours,” he wrote.

Klymenko said that the Lebanese freighter FK HATICE going from Berdyansk to Turkish Samsun was waiting for permission to pass is 85 hours. If that is the ship a few days earlier kept in the Kerch Strait on the way from the Black to the Azov sea is still 25 hours, he said.

See also:  Poroshenko has approved the program of development of APU 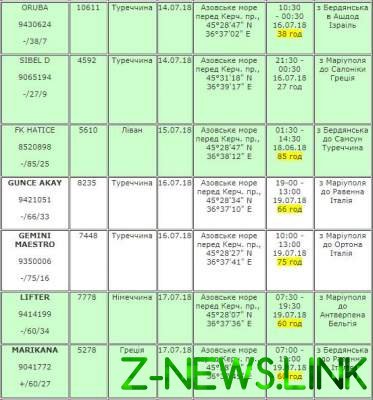