Russia fires missile, capable of carrying hypersonic warheads, from Europe to Asia in test of nuclear submarine in Far North 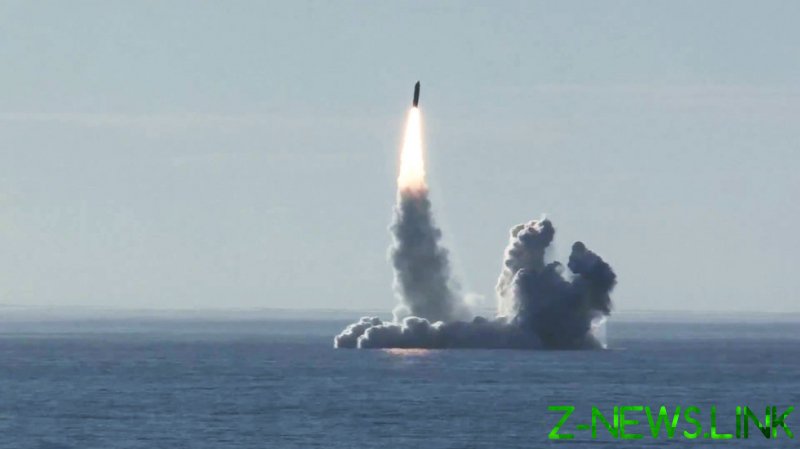 On Thursday, officials revealed that the Knyaz Oleg submarine had completed its final stage of technical assessments after launching a Bulava missile. The rocket took off from the White Sea, an inland body of water close to Scandinavia, and was confirmed to have struck ground at the Kura firing range in Kamchatka, more than 6,000 kilometers east of Moscow.

“The strategic missile cruiser Knyaz Oleg, as part of the state test program, fired a Bulava ballistic missile from the White Sea. The rocket was launched from a submerged position at the Kura training ground in Kamchatka,” the military department said in a statement, adding, “the missile warheads have successfully arrived in the specified area at the estimated time.”

The nuclear submarine is reportedly set to be battle-ready in the Russian Navy by the end of the year, joining another four submersibles already deployed.

The news comes just weeks after the country’s military announced the successful test firing of a Zircon anti-ship hypersonic missile. The projectile has been designed to hit enemy surface ships, such as frigates and aircraft carriers, as well as ground targets located within the range of the missile. Zircon’s velocity, up to nine times faster than the speed of sound, makes it difficult for it to be stopped by any anti-aircraft systems.

Russia has also previously unveiled a range of plans to update and upgrade the country’s armed forces, as well as its continued efforts to expand its missile stockpile. The ‘Future Soldier’ program, known as ‘Ratnik’ (the Russian word for ‘warrior’), includes the development of robotics and exoskeletons, as well as unmanned aerial vehicles.

“In regards to the ‘Future Soldier’ project, extensive work has been carried out this past year, together with domestic industry enterprises, to include a new ‘robotic’ subsystem as part of the combat outfit of a soldier,” General Oleg Salyukov, the current head of the Russian Ground Forces, said.

On Tuesday, the Kremlin said it was concerned about rumors that China had launched its own hypersonic missile, claims denied by Beijing. Speaking to reporters, President Vladimir Putin’s press secretary, Dmitry Peskov, said recent reports the advanced nuclear-capable weapon had been test-fired in August were nothing for Moscow to worry about. Asked whether Moscow would worry that such a development could be a threat, the Kremlin official said that “no, it isn’t being seen that way.”

“We have allied relations with China,” Peskov went on. “China is developing its armed forces and its weapons systems, but it isn’t going beyond the framework of any international agreements,” he added.