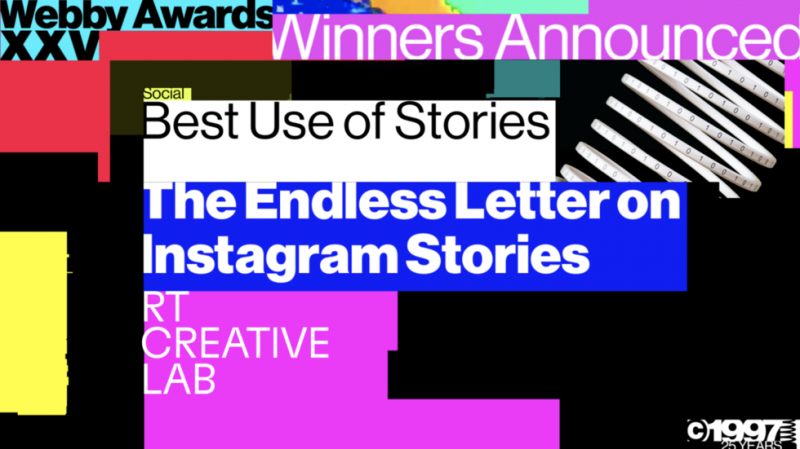 The Webbys’ 25th anniversary season has been a record-breaking year for the American award dubbed ‘the Internet Oscars’. Almost 13,500 entries from all 50 states (USA) and more than 70 countries were reviewed by the International Academy of Digital Arts and Sciences. Оnly 10% made it into the nominations, and only a handful of projects received the coveted prize.

“We want to thank the Academy for recognizing our work. We want to thank our families, friends, and colleagues who supported us each year on our road to winning this much-coveted prize,” says RT Creative Lab Director Kirill Karnovich-Valua. “We congratulate our artists and partnerswithout whom this victory wouldn’t be possible!”

‘The Endless Letter’ is a unique graphic series featuring hundreds of excerpts from original World War II letters from the frontline, which have been collected from Russian archives by the team from the ‘Letters from the Front’ project. The quotes are accompanied with illustrations created by young students of the Moscow RANEPA Design School, as well as renowned artists Peter Bankov and Mikhail Sorkin. The letter fragments and illustrations were shared line-by-line on Instagram Stories, creating a kind of ‘endless letter’ with an original, non-stop score by young Russian composer Max Makarychev.

“Behind every line, every extract was a real person. That’s what makes The Endless Letter especially poignant. We have quoted around 400 letters, each giving a comprehensive story in just one frame,” says RT Creative Lab producer, Elena Medvedeva, who edited and curated ‘The Endless Letter’ series.

Here, in Russia, when you talk of WWII you talk of ‘our grandfathers and grandmothers,’ who are by now very, very old people, gray-haired and wrinkled. But these letters give a harsh reality shower: the people upon whom that monstrous war was forced were actually in their 20s and 30s. It could be us.

‘The Endless Letter’ is part of the #VictoryPages project – a large, multi-platform digital project dedicated to 75 years since victory over Nazism. It presents an opportunity to assess the magnitude of May 9, 1945, the day the war ended for the USSR, through the personal impressions of contemporaries. Nearly 27 million were killed or died during the war. Victory Day is significant in Russia because every family has a war hero who either returned home or died in battle.

“That is why it was important to reconnect V-Day to the actual tragedy that happened in the previous century – to the real people and their actual voices,” says Medvedeva.

“These people were caught between the ruthless enemy and the state who used them as a resource, but in the end when they went through those harsh days it was in the name of loved ones: their parents, their wives and husbands, sisters and brothers, their children and their friends. It was for their home, even if this home was some small house near Krasnodar.”

Our project is a story of victory told for the young, by the young, using the language of modern media, on five social networks.

Different series of the #VictoryPages project have gathered a total of 69 awards, including Webbys, Clio Awards, Epica Awards, Shorty Social Good Awards and Red Dot Awards, among others.