Home / WORLD / Roman Protasevich’s dramatic arrest by Belarus has caused outrage. But why is Western media failing to report his neo-Nazi links?

Roman Protasevich’s dramatic arrest by Belarus has caused outrage. But why is Western media failing to report his neo-Nazi links? 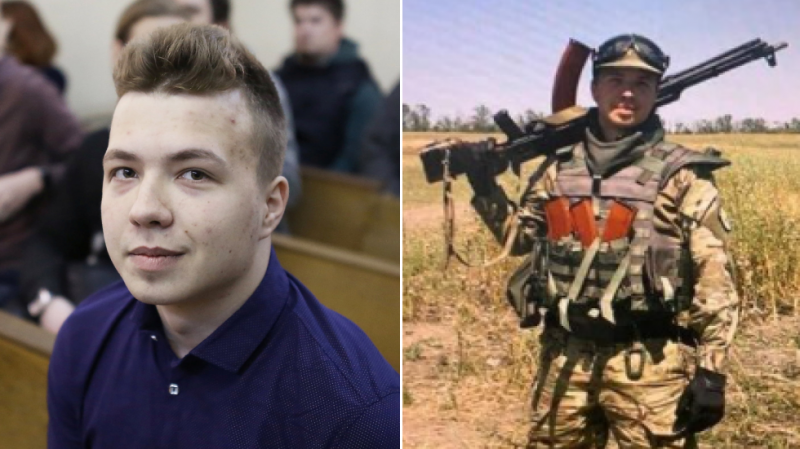 It’s probably safe to say that before this week almost nobody in the West had heard of Belarusian opposition activist Roman Protasevich, the editor of a Telegram channel banned by officials in his native country. On Sunday, however, all that changed.

Protasevich became an international cause celebre after the passenger jet he was traveling on from Greece to Lithuania was diverted to the Belarusian capital Minsk, and he and his girlfriend, Sofia Sapega, were arrested on the tarmac.

With fame comes attention. It wasn’t long before critics threw a spotlight on Protasevich’s past, casting doubt on his credentials as a hero of liberal democracy. Instead of championing Western values, they said, the activist is a neo-Nazi groupie, who had had fought with the notorious Azov Battalion in Ukraine.

Proof of the Belarusian’s service with the far-right-led militia was soon made available, with photographs circulating online, as well as statements by both his father and the regiment’s one-time commander Andrei Biletsky. Questions remain as to whether Protasevich served in the outfit’s propaganda department or as a front-line fighter, but his association with the regiment is no longer in doubt. Meanwhile, pictures have emerged of him wearing a T-shirt with neo-Nazi insignia, as well as stories of his involvement with Belarusian nationalist militia.

But does any of it matter? Lots of people do stupid things in their youth, but then move on. What matters is what Protasevich is doing now. Why drag up all of his past baggage?

These are not unreasonable questions. It is fair to wonder why Protasevich’s far-right connections have any relevance to his arrest and the diversion of a civilian airliner.

Fundamentally, the charges leveled by the Belarusian state against Protasevich have nothing to do with his links to the far-right. Instead, they concern his work organizing anti-government protests in Belarus. If it could be shown that, in the process of doing this, the activist propagated far-right views, then his background might indeed be relevant. But if all he was doing was mobilizing opposition to what many believe was a fraudulent election, then his dubious past is neither here nor there. He was engaged in legitimate democratic activity and should be set free.

Second, his political views have no bearing on the legal status of Belarus’ action in diverting his aircraft. Either it’s legal to ground a passenger jet to arrest a wanted man or it isn’t – the political opinions of the passengers are irrelevant.

And third, bringing up those opinions may be seen as an attempt to excuse an illegal act by simply changing the conversation.

Mention of Protasevich’s fascist links deflects the conversation from the abusive nature of the Belarusian regime to the alleged sins of its opponent. The victim becomes the offender. It could be argued that participating in that game is a gift to the authorities, and that discussion of anything that detracts from resolving the humanitarian crisis in the country should be avoided.

These are all fair arguments. But they aren’t the full story.

For starters, it is fair to say that media reporting should be accurate and complete. Describing Protasevich as a “journalist” or “reporter,” and painting him as a democratic activist, without mentioning his far-right connections, deprives readers of understanding the full picture. People may get an entirely wrong impression of who he is – simply because editors think the public can only deal in terms of heroes and villains.

Second, the moment that somebody engages in political activity, their past is effectively fair game. The essence of democracy is accountability, which, in turn, requires full disclosure of facts and that all those engaged in politics account for their past activities. Protasevich cannot claim a right to privacy for the mistakes of his youth.

Third, facts shouldn’t be suppressed just because they are politically inconvenient. Democratic principles rule out the notion that uncomfortable truths should be locked away in a cabinet, only to be let out when it’s safe for the public to know them. Once we head down that path, any pretense of democratic freedom goes out the window. People deserve to know the truth.

Beyond that, this case also raises some important questions concerning the types of people that Western states and political activists hold up as their champions. In an article for Politico, journalist Leonid Ragozin argued that Protasevich was exactly the sort of person that the West should be supporting in order to promote democratic change in countries such as Belarus, insisting that states should “provide people like them with safe havens and opportunities to do their work in the EU.”

According to Ragozin, “by embracing the healthy part of society in both countries and working together with people like Protasevich and Navalny to build a common European future, the EU will do more to bring about the end of dictatorships than any number of sanctions can ever offer.”

But is it really fair to call somebody with Protasevich’s far-right connections “the healthy part of society”? Most people would probably think not. But if society at large doesn’t know about the activist’s past history, the absurdity of Ragozin’s proposal wouldn’t be as obvious. Suppressing the truth, in other words, can have dangerous consequences – in this case, committing to supporting “healthy” parts of society which look far sicker than they should.

It’s often said that ‘my enemy’s enemy is my friend.’ But this isn’t true in every case, and the promotion of extremists can have highly negative consequences. Ukraine is a prime example of this sad reality. The pro-Western revolutionaries who overthrew president Viktor Yanukovich in 2014 did so with the support of far-right groups, despite championing a more liberal stance themselves. Both they and their Western backers pretended that the neo-Nazis didn’t exist, or if they did, assumed they weren’t a problem. But others did notice them, and their presence helped to delegitimize the new government and sparked rebellion in eastern Ukraine.

This all shows that you ignore unpleasant truths only at your peril. Protasevich’s murky past is irrelevant to the rights and wrongs of his arrest, and it may indeed deflect attention from the misdeeds of the Belarusian state. But that doesn’t mean that we should act as if that past doesn’t exist – people deserve to hear the full story. Fair reporting requires one to tell the truth – the whole truth, and nothing but the truth – not only the bits of it that suit the agenda.