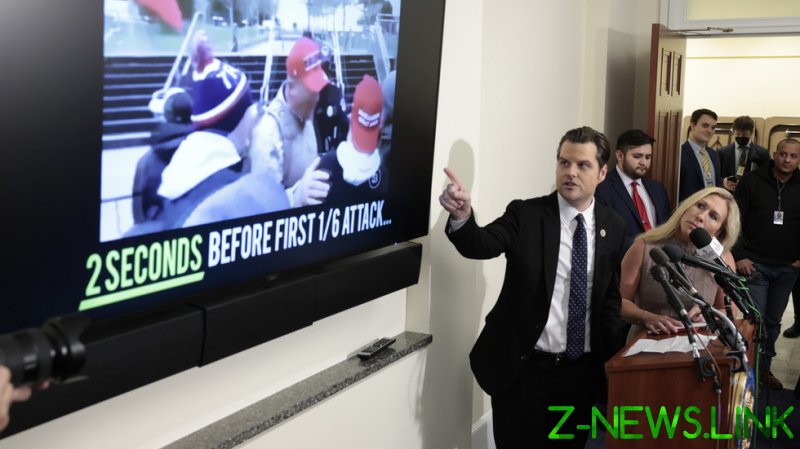 Rep. Matt Gaetz (R-Florida) and Rep. Marjorie Taylor Greene (R-Georgia) theorized on the anniversary of the January 6 Capitol riot that the federal government may have played an active role in the day’s events.

During a Thursday press conference, the two firebrand Republicans once again rejected Democrats referring to the Capitol riot as an “insurrection,” a specific crime no one jailed for January 6 is currently facing.

Gaetz made clear he and Greene, who was recently suspended from Twitter, were not there to “celebrate” the events of January 6, but to hopefully “expose the truth.”

The truth, according to the lawmakers, may lead straight back to the FBI. “Director Wray was asked under oath before the Congress about the federal assets and agents that were on the ground on January 6th, and he wouldn’t provide clear answers,” Gaetz said.

Gaetz repeatedly referred to Ray Epps, an ex-Marine that some conservatives have theorized was an FBI plant, filmed goading people into entering the Capitol and crossing police barriers.

A man who resembles Epps could be seen in videos recommending protesters go into the Capitol, though he’s not always met with a warm welcome, with some even referring to him as a “fed” at one point.

Epps has refused to answer questions about his involvement in the Capitol riot or conspiracy theories around his involvement with the FBI, telling Daily Mail last summer when they confronted him at in Arizona to “get off my property.”

Gaetz claims Epps’ potential involvement in instigating the riot can be partly backed up by his name allegedly being removed last year from the FBI’s Capitol Violence Most Wanted list. “Attorney General Garland was asked in the judiciary committee by my colleague Thomas Massie about Ray Epps. He could have cleared up that circumstance and resolved all of these questions, but he declined to do so,” Gaetz said.

In a Thursday interview with journalist Brendan Gutenschwager, Gaetz also mentioned Epps as one of multiple potential “instigators” on January 6.

Gaetz and Greene also performed a march from the White House to the Capitol to mark the one year anniversary of the Capitol riot. In a Thursday morning interview on Steve Bannon’s podcast, Gaetz said he and others are not “ashamed” of their efforts on January 6.