Pulling a Trumpie? Brazil’s Bolsonaro says he won’t concede defeat to ‘fraud’ in next year’s election 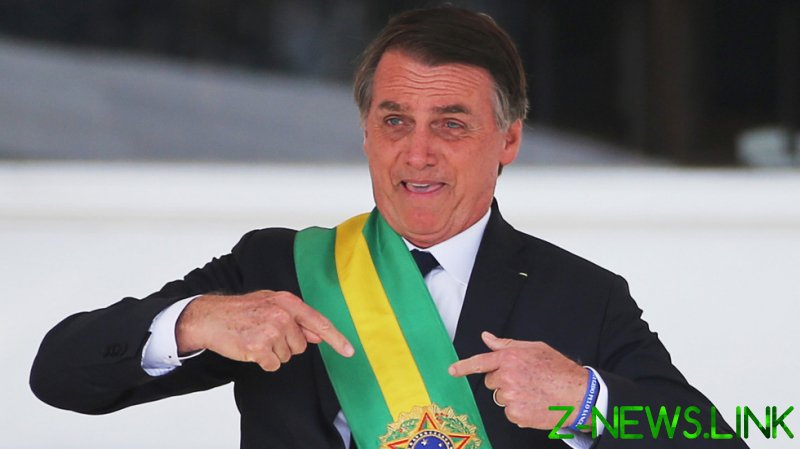 “I’ll hand over the presidential sash to whoever wins the election cleanly,” Jair Bolsonaro said in an address on social media. “Not with fraud.”

The warning from the right-wing strongman was directed at opponents of the mooted constitutional reform, which would mandate paper ballots in all elections in Brazil. The country is using a system of electronic voting, which was first introduced in 1996, to collect and to tally votes, allowing it to announce election results hours after a ballot.

Bolsonaro has long insisted that the system is vulnerable to fraud and that paper ballots need to be introduced to allow audit. Without offering evidence, he claimed that he would have won the 2018 presidential election in one round if the polling had been fair. He led in the first round with just under the 50% threshold and beat his second-round opponent, Fernando Haddad of the leftist Workers’ Party, securing 55% of the votes.

Next year, Bolsonaro is expected to run against popular former President Luiz Inacio Lula da Silva of the same Workers’ Party, who was barred from running in 2018 by a controversial criminal conviction. Brazil’s Supreme Court cleared his criminal record last year, making him a viable candidate again. Opinion polls project Bolsonaro’s defeat to Lula, as the leftist politician is usually called, with some indicating a one-round landslide for the ex-president.

Brazilian legislators tried to introduce mandatory paper ballots in 2015 through a law, leading to a lengthy legal battle. In 2018, the Supreme Court issued an injunction to review the law and finally killed it off last September by ruling it unconstitutional.

Bolsonaro is painting the top court’s opposition to paper ballots as a ploy to illegally install Lula back in power. “They took Lula out of jail, made him eligible, for what? To elect [your] president in fraud?” he charged, in an interview last month.

The proposed printed-vote reform is currently being reviewed by a parliamentary commission. If put to a vote, it will require a two-thirds majority of representatives to pass, which seems unlikely to happen.

Leaders of 11 political parties, including major members of the ruling coalition, have already announced they would oppose the proposal, saying that the Brazilian electronic voting system has proven its merits, including resistance to tampering. Objections came even from the right-wing Social Liberal Party, which propelled the independent Bolsonaro’s candidacy in the 2018 presidential run and currently has the largest faction in the Chamber of Deputies, tied with the Workers’ Party.

There is also the issue of cost that implementing paper ballots would incur. It is estimated at around $400 million by Supreme Court Justice Luis Roberto Barroso, who also chairs the Superior Electoral Court, the top judicial body for election matters. He is a vocal opponent of the proposal.

Critics of Bolsonaro say his passionate insistence on paper ballots is simply laying the groundwork for an attempt to latch on to power after an inevitable defeat by Lula. They say a similar strategy was used by ex-US President Donald Trump to challenge Joe Biden’s victory last year.

Arguably, a similar playbook is currently being used in Peru, where right-wing candidate Keiko Fujimori refused to concede to her leftist opponent Pedro Castillo, claiming election fraud without offering any evidence. She managed to stall the certification of Castillo’s win by almost a month now through legal challenges, and is demanding an “international audit,” stating that without one the next government of Peru would lack legitimacy.