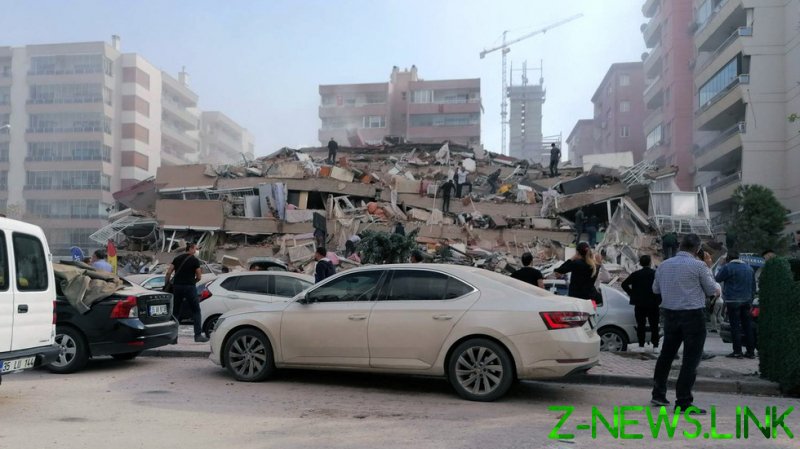 The USGS issued a preliminary alert recording the quake as a 7.0 magnitude temblor, but Turkey’s Disaster and Emergency Management Presidency (AFAD) said it was a 6.6 quake which struck along the Aegean coast.

The temblor struck shortly after 1:51pm local time near the Greek island of Samos, with the Mayor of eastern Samos claiming multiple buildings had collapsed.

Eyewitness footage from around the Aegean shows crowds evacuating onto the streets as large dust clouds emanated from collapsed buildings in the distance.

Turkey’s Interior Minister Süleyman Soylu issued a Twitter statement about the earthquake, claiming that at least six buildings had collapsed in Izmir and reports of potential casualties were streaming in from several other cities.

“Until now, 6 building demolition notices have been received in İzmir Bornova and Bayraklı. Damage and loss of life reported in Uşak, Denizli, Manisa, Balikesir, Aydın and Muğla, our teams continue their screening and interventions in the field. Get well soon,” Soylu wrote.

According to local media reports, the earthquake lasted roughly 15 seconds, with shockwaves felt as far away as Istanbul and Athens.

Turkey’s Disaster and Emergency Management Presidency (AFAD) said the epicentre of the use was 17 km (11 miles) off the coast of the Izmir in the Aegean Sea, at a depth of 16km. The USGS said the quake occurred at a depth of 10km some 33.5km offshore.

Meanwhile, residents on the island of Samos have been urged to avoid coastal areas.

“It was a very big earthquake, it’s difficult to have a bigger one,” said Eftyhmios Lekkas, head of Greece’s earthquake response organization.

Governor of Istanbul Ali Yerlikaya said there were “no negative” reports of injuries or damage in his city.