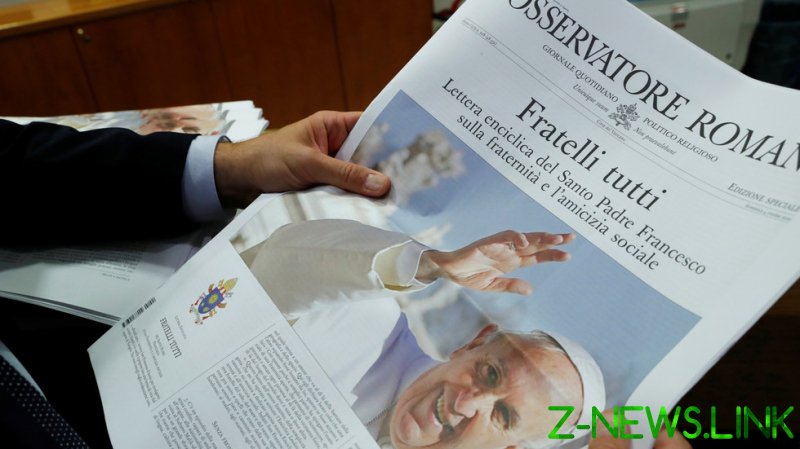 Francis said the Covid-19 pandemic proved that free-market policies have failed to produce the societal benefits promised by their proponents. “The marketplace, by itself, cannot resolve every problem, however much we are asked to believe this dogma of neoliberal faith,” the pope wrote in his third encyclical, called “Fratelli Tutti,” to all Catholic bishops.

“The fragility of world systems in the face of the pandemic has demonstrated that not everything can be resolved by market freedom,” Francis said. Countries must recover a “sound political life” not dominated by financial speculators, he said, and “we must put human dignity back at the center and on that pillar build the alternative social structures we need.”

The pope’s vision for a post-Covid world is also leftist in terms of property rights as he noted that the Christian tradition has never recognized private-property rights as “absolute or inviolable,” and there is a “social purpose of all forms of private property.” Francis said ownership of private property “can only be considered a secondary natural right,” secondary to the “universal destination of the earth’s goods” and the “right of all to their use.”

He also railed against populism, nationalism, war, social-media divisiveness the death penalty and social injustice, and reiterated his views on the benefits of immigration. He called racism “a virus that quickly mutates and, instead of disappearing, goes into hiding and lurks in waiting.”

Francis also called for “open societies that integrate everyone,” a line that would just as easily fit in a brochure for a George Soros-backed activist group. “Every brother or sister in need, when abandoned or ignored by the society in which I live, becomes an existential foreigner, even though born in the same country,” he said. “They may be citizens with full rights, yet they are treated like foreigners in their own country.”

Although the encyclical was woke-friendly in many respects, its title, “Fratelli Tutti,” translates to “Brothers All” in English – connoting male dominance to some. The Vatican said the title was taken from the words of St. Francis of Assisi, the pope’s namesake, and couldn’t be changed. And in any case, an encyclical is inherently addressed to the whole world, and the Italian word “Fratelli” means brothers but can be used to mean brothers and sisters.

The Rev. Thomas Reese, a Jesuit priest based in Washington, DC, said the title would cause the Vatican “self-inflicted wounds” and lamented that the church didn’t “get ahead of the curve for once.” Catholic women’s-rights activist Tina Beattie of the UK tweeted: “Languages develop. Surely, you’re not saying the language of the past binds us forever. Changing attitudes to women require linguistic changes.”

Annemarie Paulin-Campbell, a Jesuit school chief in South Africa, called“Fratelli Tutti” an “encyclical of love that misses the boat on women.”