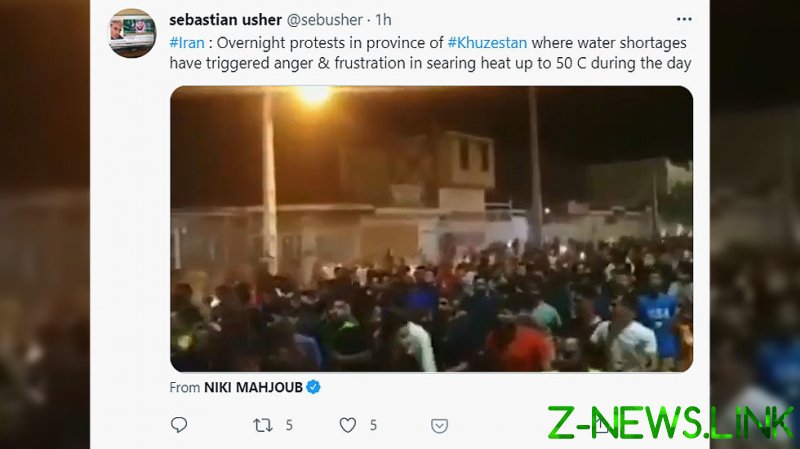 Protests erupted in several cities in Iran’s Khuzestan Province late on Thursday night, continuing into Friday. Droves of people could be seen marching through the streets, chanting their need for drinking water, with some shouting, “we’re thirsty! We want water!”

While the protests were mostly peaceful, some demonstrators in the cities of Mahshahr, Kut Abdullah, Khorramshahr, and Mollasani were reported to have attempted to blockade roads and burn tires in protest.

People also took to social media to spread the news of the protests, pleading for recognition of the ongoing situation and imploring internet users to “please be their voice”, with fears that the protesters could face violence or an imminent media blackout.

The demonstrations that took place on Thursday and Friday for water access are not an isolated event, but are part of a recent demand for water, as access is becoming even more scarce in the region. On July 11, hundreds of Iranian Arabs peacefully protested outside the governor’s building to demand a resolution to the shortage. However, many were detained by authorities.

Iran’s Energy Minister Reza Ardakanian forewarned the country’s citizens of the drought, remarking that it was turning out to be “one of the driest years in five decades.” Some regions in the south and east of the country have had a 50 to 85% reduction in rain.

In oil-rich Khuzestan, a southwestern Iranian province that borders Iraq, temperatures can soar to up to 50C, meaning key water supplies can often run out, with wells and wetlands drying up.