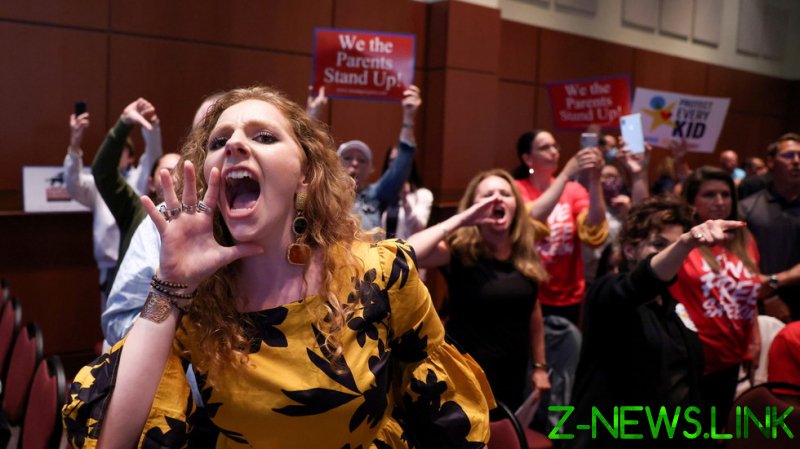 Loudoun County, Virginia, is not the most obvious site for a flashpoint to erupt that could have repercussions across America. Close to the seat of power, Washington, DC, it’s an affluent area with a median household income of $142,299.

Since 2010, its population has risen by 34% and crucially 28% of residents are under 18. Many parents work in government and are adept at campaigning and organising, which has spawned the birth of a vocal and increasingly prominent organization, Fight For Schools. As the name suggests, it is a parents’ group that wants to have more say in what goes on in schools.

Formed in April by just eight people, it has since been catapulted into the living rooms of millions of Americans with coverage on influential platforms such as Fox News. The founders were spurred into action when made aware of a Facebook group, Anti-Racist Parents of Loudoun County.

A school board member had posted a message among the group encouraging others to confront parents who were opposed to Critical Race Theory (CRT) being taught in local schools. There was also a simultaneous debate about when to open up schools post-lockdown.

Fight For Schools Executive Director Ian Prior said, “These individuals [in the Facebook group] started listing over 60 parents they wanted to plot against. There was a post on there that talked about infiltrating parents’ groups, publicly exposing them and even hacking their websites.

“What we found out is that a lot of the parents listed were actually just going to school board meetings and speaking up for opening schools. Not everyone was writing Op-Eds, had websites or was on social media talking about this stuff. That is what really poured gasoline on the fire here in Loudoun County and motivated us to do something about it.”

The extent of the power and influence school boards have was something most parents were not fully aware of. Even Prior himself admits he had never really thought about it until August last year, when the debate over when schooling should resume in the wake of Covid-19 was raging.

He admitted, “A lot of us point the finger at ourselves and say: ‘I didn’t pay attention to this before either’. I just assumed you vote these people in, they have the best interests of the kids at heart and are trying to serve their community. But, no, these are political people.

“I’m not saying they are smart political people, but they are using the positions either to get to the next rung in the ladder of their political career or they become so drunk with their own power in their echo chamber, they think they can do anything. They forget that their job is to represent the entire country, and that their primary purpose is to ensure that kids have a good education.”

Fight For Schools is focused on several issues, but they revolve around a similar theme. And that is overreach that undermines parents’ constitutional rights. The debate is becoming ever more bitter.

Prior explained, “They refuse to hear any other side of the argument. That’s really one of the reasons we’re seeing the toxicity that we are… You have a group of individuals that are, in my opinion, extremely radical in their beliefs, which is fine.

“Everyone is entitled to their opinion but when you’re a government actor, you have to hold yourself to a higher standard and you also have to respect the laws and people’s constitutional rights.

“What we’ve seen from our school board – but school boards all over really – is that they just don’t have a solid, fundamental grasp of constitutional law or the constitutional guardrails that exist, they do not respect them and they are more than willing to pass legislation that, quite frankly, is unconstitutional, and does not reflect the will of the majority of their constituents. And when people voice their concern or displeasure, they immediately go ‘you’re a bigot, racist or fascist’.”

The teaching of CRT has been controversial everywhere, but the group feels in Loudoun County the issue is especially contentious.

Prior explained, “The school plays word games. No one ever tells students, ‘OK, here’s CRT, we’re going to learn about this today’. What they are doing is… training teachers to effectively teach through the lens of CRT concepts.”

The issue has already caused some disturbance in Prior’s home. He had read his daughters – who were seven and five at the time – a story about Christopher Columbus.

But on returning from school, the older girl took her dad to task. He explained, “She says ‘Why did you read us a book about a bad guy? They told us today at school that he killed a bunch of people and took slaves’.

“She showed me this video and it was really not a video for second-graders. It was a cartoon, with all these native bodies on the ground dead and a priest with a big cross in the sky forcibly converting them to Christianity. And that’s why we don’t celebrate Columbus Day anymore.

“I’ve just read my child a simple book, a historical fact. Now she’s questioning my credibility because of that, and that’s not something you need in second grade. When you get into middle school or high school, of course you’re going to talk about history, the warts and bad things. You’re also going to give some context to it, things that happened 700 years ago. When you’re seven, you don’t necessarily understand how that works. So, they are creating a situation where really they are trying to co-parent with parents.”

Another hot potato is whether children should be able to determine their gender and choose their pronouns. A fifth grade teacher in Loudoun County recently resigned very publicly, complaining of being a “cog in a machine that tells me to push highly politicised agendas to our most vulnerable constituents”.

Prior added, “They all fall within the cornucopia of issues of what happens when you send your kids through those two doors.

“I question certainly the religious conscience provision of the First Amendment; you have Christians whose beliefs simply do not align with this new policy that allows biological males to use girls’ bathrooms, it forces students and teachers to use preferred pronouns of transgender kids and puts them all in the same sports team.

“What if you’re a Muslim family and you have certain religious beliefs that don’t align with your daughter being in a locker room with a biological male? Or you’re a Christian and affirming someone’s pronouns that they can change their sex from how they were born doesn’t align with your religious values? Now you’re compelling these individuals to speak in violation of their own rights.”

With relations between the school board and the organisation predictably frosty, things are not going to settle. Fight For Schools is currently gathering signatures to try to recall board members, so new ones can be elected in their place. It’s a complicated task, but given the political and commercial experience of some members of the organisation, it feels it can present a strong case.

There are also the teachers to think about. One lost his job for speaking about transgender issues but has since been reinstated, and Prior claims more want to raise concerns.

He said, “Many of them are afraid to come out because they could get silenced, fired or put on administrative leave. There have been several teachers who’ve said, ‘I’d love to sign [to recall board members], I’m just afraid they are going to come after me’. They are afraid of repercussions and cannot exercise their First Amendment Rights, even on their own time.

“We found a teacher training [manual] of Loudoun County that said it’s the job of the teacher to inculcate morals and parents have to be respectful of that. No, that’s not their job. Their job is to teach them math, science, reading, writing, accurate history.

“Getting into social issues, especially at a young age, where you think it’s your job as a government-funded, taxpayer-funded institution to inculcate morals in kids over the parents’ objections, is morally indefensible.”

What happens in Loudoun County could set a precedent. Thanks to the group’s proximity to the nation’s capital and the attention it is attracting, it may provide a blueprint for others to follow. Opponents are not convinced, though, and accuse the group of ‘dog whistle’ politics.

But Prior dismisses these suggestions, saying: “That’s not what we’re doing at all. We’re fighting for our kids; some of us do have political backgrounds and some of us know what to do when we get on television. But that doesn’t mean it’s our motivation. Those are just tactics we’re using to highlight the fact that you have a school system that is using kids to enact personal agendas.”