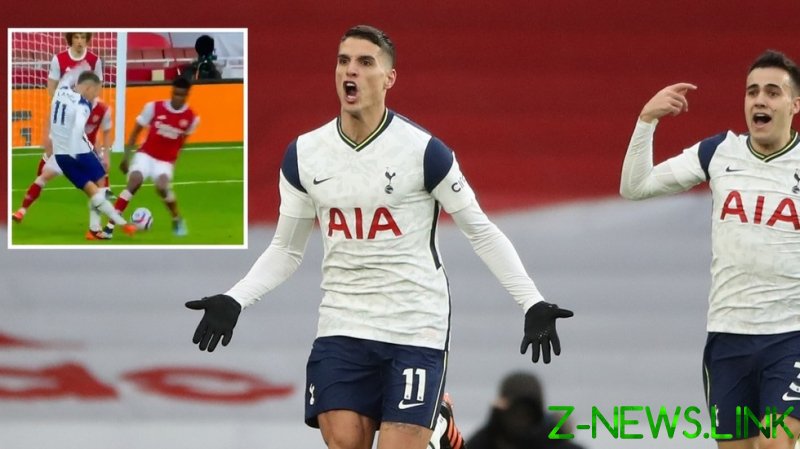 With the scores level at 0-0 in the 33rd minute, Lamela produced a remarkable finish after the ball had been laid off into his path by Lucas Moura inside the Arsenal box.

Despite being surrounded by Gunners players, the Spurs star executed a ‘rabona’ to send the ball between Thomas Partey’s legs and into the bottom corner of the net.

It was a sublime strike which instantly sent social media into meltdown.

The goal was Lamela’s first in the Premier League this season. The Argentine star had not even started Sunday’s game, instead coming off the bench to replace the injured Son Heung-min in the 19th minute.

Winger Lamela, 29, is something of a rabona specialist, scoring with the same technique in a long-range effort back in 2014.

Sunday’s strike wasn’t enough to give Spurs the lead heading into the break, however, as a deflected effort from Martin Odegaard leveled the score just before half-time.

Just under 20 minutes into the second half and Arsenal found themselves in front when Alexandre Lacazette scored from the penalty spot after Davinson Sanchez was adjudged to have fouled him in the Spurs box.

Spurs then had to attempt to get back into the game despite being down to 10 men as Lamela earned two yellow cards in the space of seven minutes, the second of which came for a petty swing of his arm at Gunners defender Kieran Tierney.

Harry Kane saw an equalizer chalked off for offside after he headed home from a cross, and the England star also hit the post from a free-kick as Spurs failed to find the goal they needed to leave the Emirates with a point.

Jose Mourinho’s men were aiming to maintain their push for a Champions League spot, but defeat left them seventh in the table, six points adrift of fourth-placed Chelsea.

Mikel Arteta’s Arsenal, meanwhile, moved on to 41 points but remain in the lowly depths of 10th in the table, although at least claim North London bragging rights.